One of the world’s most influential bands release their first live album at the apex of their musical abilities. This, we think, describes a more than suitable candidate for a glance into rock history’s rearview mirror. That’s why this month we shine a light on the celebrated Live Killers by Queen. This record has, since its release in 1979, changed the definition of a rock show. 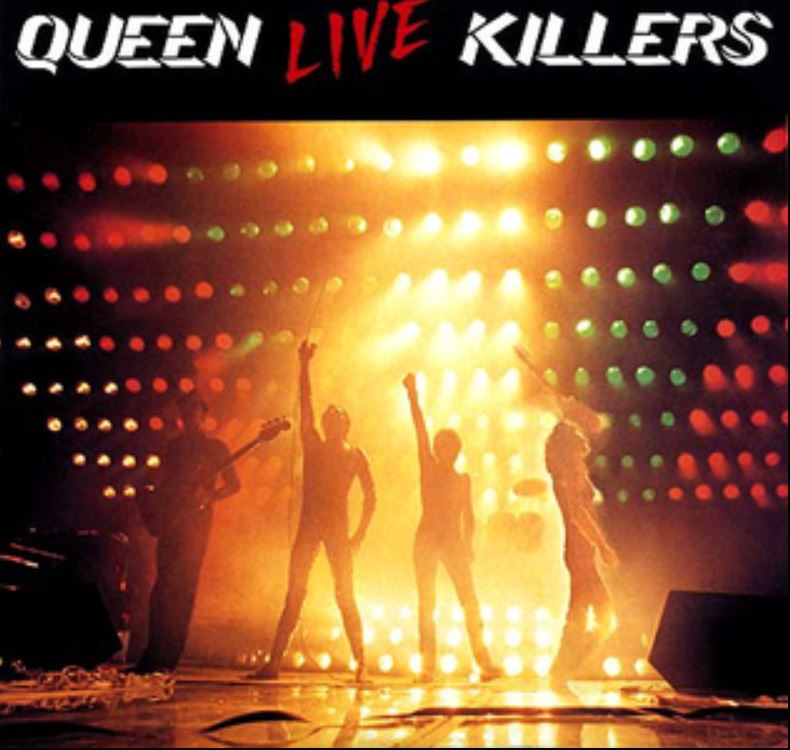 Thirty nine years ago in June, one of the world’s most extravagant acts released their first live album. At that time they had already recorded seven studio albums over a span of nine years. Live Killers is a compilation of a multitude of shows that the band played during their tour in Europe at the beginning of 1979.

Before we zoom in on this historical record, let’s travel back in time to the year 1970. The year that the band Smile falls apart and its young guitarist Brian May, then midway through his doctorate in astrology at London’s Imperial College, wants to be a full time musician. May and Roger Taylor, drummer and dentistry student, decide to find a singer to accompany them. A good friend and fan of Smile catches their eye, Farrokh Bulsara, born between the palm trees of Zanzibar. Bulsara’s itching to start his career as the frontman of a rock band.

As an art student he conceptualizes the band’s image from the get go as full of grandeur, provocation, art and a thick guitar sound. The name of the band should catch this in one stroke. In this starting period Bulsara and May are separately working on tracks, one called March of the Black Queen, the other White Queen. All three artists agree that the word ‘queen’ has the powerful feel that they’re looking for.

After joining the band Bulsara immediately changes his name. He was looking for something more in line with a band that’s called Queen. Chris Smith, keyboard player for  Smile remembers it well. In the documentary Days of Our Lives (2011) he recollects how, one night, his buddy Farrokh sits in a bar with his hands covering his face.

‘I asked him if something was the matter’, says Smith. ‘He looks at me and tragically announces that he can’t be a popstar anymore.’ Upon asking ‘why’ Farrokh stands up and shouts out: ‘Because I, Freddie Mercury, will be a legend!’ The keyboard player grins. ‘No one took Freddie serious back then.’

The rock ‘n roll guitar riffs by Brian May, the stringent drumming by Roger Taylor and the exceptional vocal reach of Freddie Mercury, all fall right into place from start. When the group is complemented by bass guitarist John Deacon in 1971, who also appears to have a voice of gold, Queen is ready for liftoff.

With songs like Seven Seas of Rhye, Now I’m Here, Love My Life and of course Bohemian Rhapsody of their first three albums the band is creating a whole new sound. It’s rock, but with some new flavors, a special sauce of opera, theater and ballet. The different layers in the vocals sound like Brian Wilson’s wall of sound on steroids. In the instrumental pieces the piano and guitar are on a par with each other, which in most rock music is unheard-of at that time.

At the end of the seventies the band’s popularity is receding, because they cannot connect with the younger audiences. The media also doesn’t hold the band in high regard anymore, on the contrary they print (extremely) critical articles and reviews. For example when Freddie Mercury muses about a combination of rock ‘n roll and ballet, this becomes the pinnacle for a negative article with the telling title: “Is This Man a Prat?”

It’s a period that’s characterized by a growing popularity for punk rock in the United Kingdom. Bands like the Sex Pistols and black Flag are slowly moving into the mainstream. Queen’s bombastic rock is not the pleasure trove it once was for the big audience. Nevertheless there is a big faithful group of fans that keep supporting the band.

In a reaction to these developments Freddie Mercury and Brian May are each working on a song that will immortalize them and make them into legends. We Are the Champions and We Will Rock You are going to be Queen’s answer to the changing musical landscape of the western world. Both songs have gathered a larger than life status over the years, and they have intrinsically altered rock music.

At the end of the seventies the act has grown so popular that they standardly perform for a sold-out stadium. This is when the usage of the term stadium rock comes into full swing. Their whole show and performance are adapted to the grandeur of the stadium. Everything is bigger, more bombastic, and has more extravagance. From the lighting to the outfits and the way Freddie addresses the public.

Along the way Mercury learns not be fazed by the huge audiences that move like waves in front of him. On the contrary, he starts to play games with them. One his favorite activities in between the songs is to engage the public in a play of call and answer. A skill that would later be adopted by bands like Guns ‘n Roses, Pantera, Nirvana and Faith No More.

This is the period that Queen records the album Live Killers. It’s a snapshot of a group that is full of passion and growing towards the top. They’re at the height of their potential and their eagerness, spirit and will to proof themselves is noticeable in every tone, riff and vocal punch. They have the raw energy, musical hunger and theatrical complacency of a band that’s at the top of their game.

The album is put together from of a mixture of different performances taken from their European tour from January until March in 1979. The band mixed the tracks themselves in their then recently bought Mountain Studio in Montreux, Switzerland. In an interview Brian May and Roger Taylor later proclaimed the adrenaline rush to be so intense during those shows that they had trouble recollecting which song belonged to which show.

While the album went double platinum in America and shined at the top of the British charts, the band was not at all pleased with the sound and the mix. Nonetheless it’s a record full of remarkable compositions and melodies.

The opening for instance is a faster version of We Will Rock You. The songs Killer Queen, Death on Two Legs and Bicycle Race have been put into one medley seamlessly melts them together. Mercury’s voice is clear and deep, like we’re used to from their  studio albums. The band plays rigidly and doesn’t defer from using different kinds of effects that we also hear on the record, like heavy echoes and delays.

End of an era

Over the course of the eighties Queen matured into one of the biggest and most renowned bands of the world. But, after a gig in Sun City, South Africa they were accused of supporting apartheid, which made for a undeserved blot on their image. Their big revival for the public eye came with their appearance at the immense charity drive Live Aid in Wembley Stadium in 1985.

The show that Freddie Mercury puts on here is of such a high caliber that all the performing artists, from Phil Collins to David Bowie and Elton John bow their heads for the kings of arena rock. It comes as no surprise that this show was chosen by the BBC as the best live performance of all time. But we shouldn’t forget that the band made their first steps on the path to true stardom with the Live Killers record. A historical moment to be cherished. happy jamming!