Brace yourself because this week’s chord of the week is the triad F sharp. It has been used by many a hit making machine, from Johnny Cash to the Prodigy. Check it out for yourself below. Curious about more chords of the week? Follow us on Instagram. 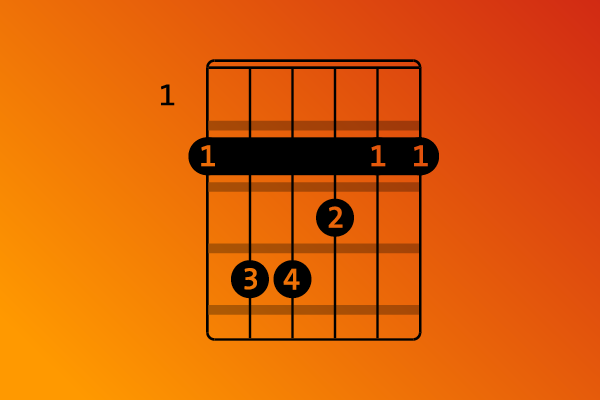 In other words, this figure always forms a major chord when your guitar is tuned in E. The chord depends on the root tone you fret on the lower E string. So, now that you’ve deciphered another piece of the guitar neck, it’s time to get started on the F sharp. And what better place to start than with this evergreen by The Eagles.

This song consists of all the basic chords and a little bit of challenge. You will find some interesting variations on the F sharp. Look carefully at the F sharp 7 and the F sharp minor. In both cases it’s a matter of lifting just one finger from the basic position of the F sharp chord. The same applies to the B major and the B minor. Check the chords here.

Shock-rocker Rob Zombie is a genius in terms of making a standard chord progression sound unique. Living Dead Girl is a good example of this. The track consists of only four chords of which three are basic triads.

The chords are A, G, E and, of course, the F sharp. That’s it. The only somewhat difficult chord is the barre F sharp. Practice a little with the vocals and you can amaze people if you include this song in your standard jam. A good song is not necessarily difficult.

Have you already mastered Hotel California? If so, congratulations! The next song has almost the same chord progression. Although the Prodigy track Fire Starter is from a completely different genre – and generation – it has a lot in common with The Eagles’ hit.

Here we again see the use of the F sharp and the F sharp minor as well as the B and the B minor. Both minor chords, as you already know, differ only a fret from the major. You have to practice a bit with the timing, but that’s what the weekend is for of course.

Did we already mention that the biggest outlaw in country music wrote one of his most badass songs in F sharp? Yes, we did. Johnny Cash was known for his black suits, his love for the Indian community and his aversion to authorities. All this is reflected in the song Folsom Prison.

In this song the man in black sings about his imprisonment in Folsom and what led to it. At first glance the chord progression may look a bit impressive with triads like C sharp and C sharp 7. Don’t be deterred and try them out. If it’s a bit too difficult, you can also use the transposition tool and lower the song a fret. Try it and see what happens. Happy jamming!