Listening to music is great, and playing music is even more awesome. Despite the classic sex, drugs and rock & roll image, music actually seems to be good for your brain and even your health in general. So here’s a story about something you already know: playing your instrument is good for you. 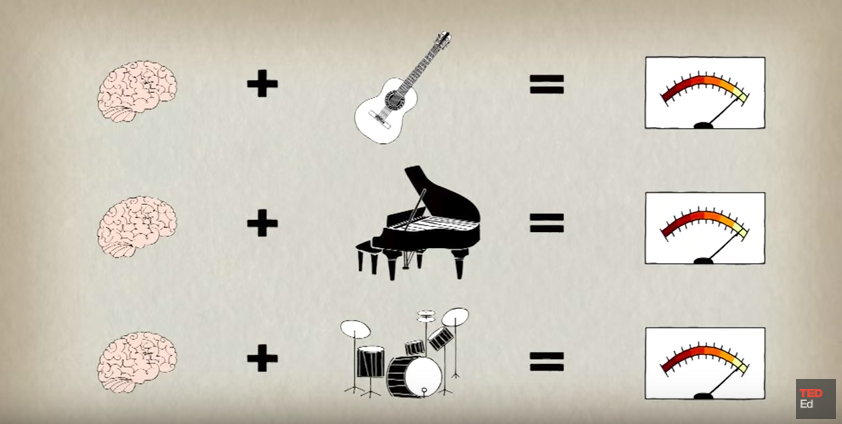 The mystery of the inner workings of the human brain is becoming more and more unraveled by cognitive science and neuroscience. With the help of an MRI scan for example, what happens in which parts of the brain is becoming increasingly clear, bit by bit (or rather, slice by slice). After the Nobel Prize winning research project ‘sex in the MRI scan’ in 1999, scientists also started looking at what happens when you play an instrument.

Listening is silver, playing is gold

Check out this cool explainer video about brain activity and music:

One of the things explained in this video, is that listening to music and playing music are two very different things. In fact, playing an instrument is the equivalent of a full body workout for your brain.

“When listening to music, a lot of areas of the brain are active at the same time, but when playing an instrument, even more areas become active. That’s because the parts that govern motor skills and visual processing join in as well, so playing music is in fact more enriching for the brain.”

According to researchers worldwide, playing music is good for:

Université de Montréal in Canada compared reaction times of people with and without musical training. The study shows that “these results strongly point towards musicians being better at integrating the inputs from various senses.”

Research from Geneva, Switzerland shows that musical training alters the structure of your brain and improves certain abilities, such as memory.

“This is the idea that making music together makes you feel affiliated to other people and therefore makes you function better as a group.” Professor Lauren Stewart is a psychologist from Goldsmith’s University, and co-director of the Centre for Music in the Brain at Aarhus University, Denmark.

An article titled “Musical training shapes brain anatomy, affect function” published by Society for Neuroscience states that: “Extensive musical training affects the structure and function of different brain regions, how those regions communicate during the creation of music, and how the brain interprets and integrates sensory information.”

But that’s not all! Music can also be used as therapy for people with brain damage and neurological disorders.

“There’s more and more evidence that music helps people that are suffering from Parkinson’s or dementia do things they would normally not be able to do anymore”, Dr. Daniel Glaser explains in an interview with The Guardian.

“Being a musician is good for your brain”

If you’re not totally convinced yet, check this out: Anita Collins gives a summary of some big studies about music education, but she also deals with a few common misconceptions about playing music;

Whether you’re 4 years old, or 90, playing the piano, guitar or any other instrument is healthy for your brain. Dr. Erik Scherder not only talks the talk, he also walks the walk now, because he started learning to play the violin at age 65. You can read it on the back of his book:

“Erik Scherder plays the violin. He’s not very good at it yet, but practicing stimulates his brain. It makes him healthy—and happy. Music, experienced in whatever way, professionally, spontaneously, passively or actively, will work miracles.”

So what are you waiting for? Grab your instrument and hit it! Everyone is a musician.