Producer and DJ Rich Medina came to our home town to give a lecture on the origins of hip hop in club VERA. After his talk we had a chance to speak with Rich in the backstage.

We walked backstage and saw Rich standing there with a cigarette in one hand and a glass of rum, on the rocks, in the other. Medina took his time to answer our questions about favorite chords and crazy backstage moments.

Hi Rich, thanks for meeting with us!

“No problem guys. You actually got lucky. I don’t reply to my Instagram messages that often. So now we’re here, fire away.”

Great! We were wondering what your parents said when you told them you wanted to be a DJ.

“My mother asked me: ‘Do the boys your going to hang out with have guns? No? Good. Then go. Because I know these other guys you like and they’re dangerous. So if this is a change from that, be careful, have fun and be blessed.'”

Are your parents proud that you travel around the world not only performing, but also teaching about a culture that nobody expected to become so mainstream?

“Of course. And as I already said on stage, my start as a DJ was as a child. My sister is eighteen years older than me and her first husband was a local disc jockey. So it wasn’t foreign for me, you know what I mean. It wasn’t far away from my family. The guy had a real job during the week, but in the weekends he used to play records. So I grew up with it.”

Wait what, your sister is eighteen years older?

Doesn’t it feel strange to be a part of something that once was in your backyard and now has become a money machine?

“That’s why a lot of people have a hard time diving deep in the thing that they pursue for their degree. Because the person that they learn from, they may be passionate, but everything they know comes from books. But you know, book learning and the hands-on approach are two different things.

“Even as an athlete I always performed better when I was playing under coaches that played the game on a higher level.”

What sports did you play?

We wanted to ask you how tall you are.

“I’m six foot six. I played basketball in high school, I played in Cornell University. I played one season of semi-professional basketball. And then reality came. Not everybody is going to the NBA. Praise God I had my degree and my art to fall back on.”

So the NBA became DJing right?

So now something completely different. Do you play an instrument besides the wheels of steel?

“Yes I do. I’ve played piano as a kid for eight years. I was in a jazz band on tenor and baritone saxophone in high school and I hated my music teachers. So I stopped playing. But later when I became a music producer all of that music theory from scales to chord buildups came pretty handy.

“Even as a DJ it helped me a lot. Mixing records in key is pretty essential. It’s like any instrument, you just have to play, play, play until you get the hang of it. And when someone asks you to play a tune, you just do it because you’re skilled. So the same goes for mixing.

“I have applied my musical self in the studio and to the DJ booth like a musician. Even though I tactically don’t play those instruments and I can’t sit down and play you a song on the keyboard, if you leave me alone in the studio for long enough, it will sound like I know what I’m doing.” 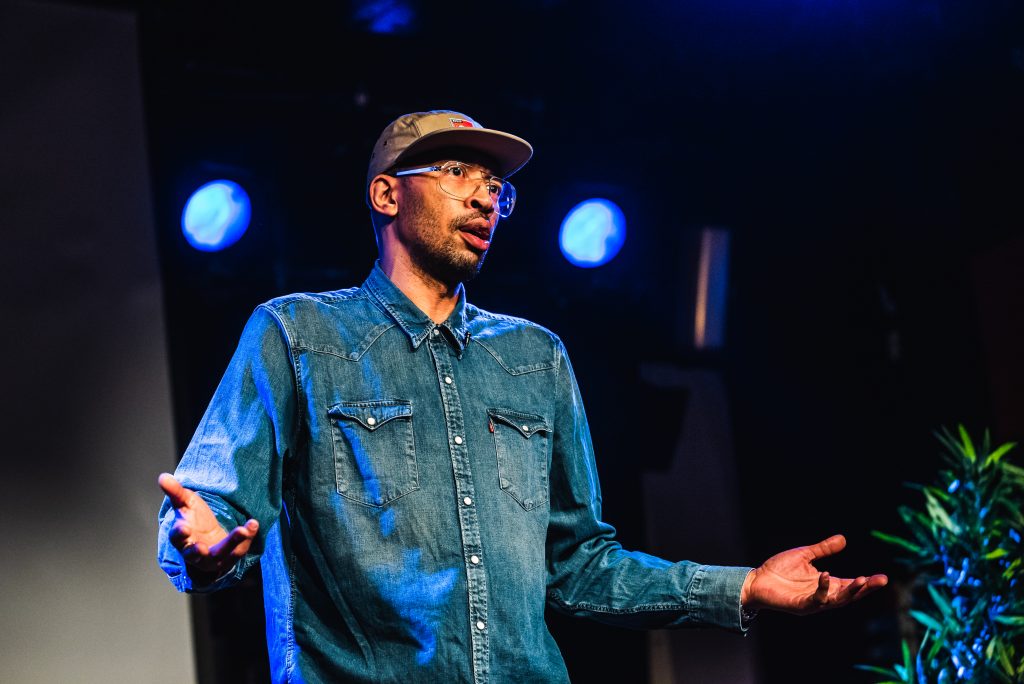 When your producing or mixing what are keys or chords you like to fall back on?

“I always fall back on a gospel sensibility. I wouldn’t say they are keys or chords. I would say the chord-progression sensibility of gospel carries me through everything.”

What is the craziest backstage adventure you’ve had?

“Man, craziest backstage moment? How much tape you got, man? Because I have a decade worth of crazy stories. But let me think of a good one. Ah yes. I played the ten-year anniversary of a party called Deep. It’s a house music party organized by a guy called Marques Wyatt in Los Angeles.

“So we’re doing our thing and suddenly Prince came to the party. He kind of passed through our room wit his entourage. Big muscle guys all around him and Prince with his cape in the middle. Fifteen minutes later – after he had said hi to Marques and Louie – he came back to our room for the next three hours.

“He was just sitting. Listening. If I put on a record that he liked he would reach out with his cape and make gesture of appreciation. It’s like getting a handshake from God. So that was pretty crazy.”

If you can give a beginning artist a piece of advice, what would it be?

“Be polite, work hard and don’t expect anything. If you come into this business with expectations you’re going to get heartbroken. So work hard, shut the f*ck up and work some more. In time your perseverance will begin to take care of you, you know.

“It’s important to have people around you who love you and take care of you. People who dare to tell you ‘no.’ If you surround yourself with people that tell you ‘yes’ all the time, then you’re in trouble. Those folks don’t care about you. They care only about what they can get out of you.

“So stay focused, stay honest, even if you have to hurt some people’s feelings. Staying honest is the way to go. And last but not least: keep on doing what you’re doing, because practice makes perfect.”

Photos by Jasper Bolderdijk. Special thanks to Studium Generale and LOFT for organizing a great evening in club VERA.