The Am chord for piano, guitar, and ukulele is one of the most basic triads that you have to master. That’s why we’re going to show you how you can play this chord on these instruments, and we’ll dive into some music theory magic that will broaden your knowledge about this triad.

You know what time it is? That’s right, it’s time to talk about the Am chord. This is one of the very first chords you learn to play on piano, guitar or ukulele. Coincidence? Not really. The Am chord plays an important role in many songs, and it’s one of the open chords for guitar, and ukulele. On piano, it is very convenient to improvise with this triad using only the white keys.

The Am consists of three notes: A, C, E. It’s interesting to mention that we can find these exact same notes in the C major scale . So this means the A minor is a direct relative of the C major. They complement each other, creating a sad (A minor) and joyful (C major) sound.

Let’s stop with the theory for now and take a look at the chord shapes for your favorite instrument. The theoretical explanation will come later. If you just came here to learn different ways of playing an Am chord on guitar, piano, or ukulele, just scroll to the instrument of your liking and check out what we’ve got in store for you. If you’re curious to know more about the theory behind this triad, then just read the part at the end of the blog post.

When you begin exploring the piano, the Am chord is a good start. First of all, you can approach this triad with all the white keys, since they are part of the A minor scale. Simply put, all white keys sound good with this chord. Secondly, the key of C — our orientation point on the keyboard — looks a lot like the Am chord. Actually, the two are family, and because of that they share the same genetics, or in this case notes.

When you look at the chord diagrams, you could say that we use the same notes (A, C, E) but in different order, and actually that’s pretty much what’s happening. Why don’t you play these chords on the piano and listen carefully to how they sound. Do you feel how these three triads have a bit of a different vibe, but in essence still are the Am chord? This musical phenomenon is called an inversion. It’s very useful and handy to know inversions. Why? We’ll explain that later. Jam a bit on these chord figures for now.

Here are three different ways to play the Am chord. 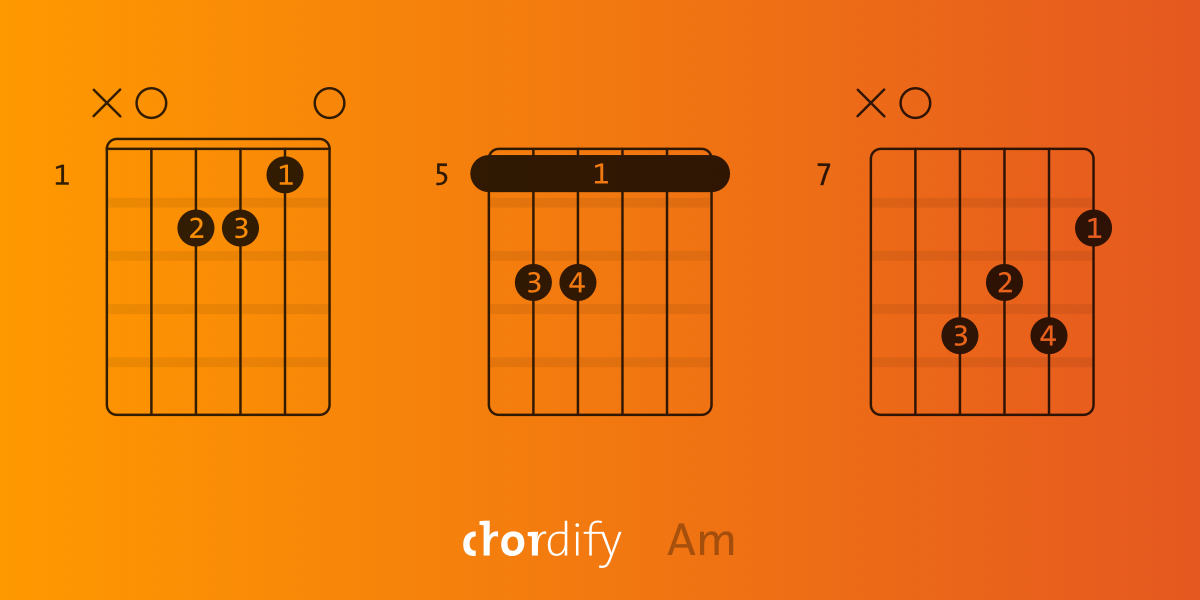 When trying out these chord shapes, note that the first chord diagram where you play an open fifth and an open first string can help you to memorize one of the universal shapes for minor chords that are rooted at the fifth string. Grab your guitar and give all the chord figures a good ring. They sound different due to the different positions on the guitar neck, but in essence it’s always the Am chord.

Remember what we said in the beginning? We’re playing all these different chord shapes, but we use only three notes: A, C, E. And the note A is always steady in front. But what if we put the C or the E as the first note? Sounds interesting right? This is called an inversion. If you can’t wait to know what this means just scroll down to the music theory part and find out.

It’s so much fun to play the Am chord on a ukulele! Due to the tuning, you can play a lot of open strings to get an Am chord. You can explore your fretboard with different shapes. Below we show you a few different ways of approaching this triad, so check them out. They might sound a bit different, but remember that they are all the Am chord.

We didn’t choose these figures randomly. All three correspond with the musical term inversions. It’s very handy for us as ukulele and guitar players to know and understand this musical phenomenon. Why? Read on and all will be explained in the theoretical part of this blog post.

The Am chord is the center of many songs. That’s why it’s one of the first chords you learn when you start playing an instrument. The Am triad is the main chord for the A minor scale. You can very easily play this scale on piano — it contains all white keys starting from one A to another A an octave up or down.

Let’s take a closer look at the scale: A (root), B, C (third), D, E (fifth), F, G. The notes A, C, and E are exactly the notes we play in our Am chord. In other words, they create the basis of this chord, a kind of skeleton. Remember this order. Now — as promised — it’s time to talk about inversions in more detail.

Remember the skeleton we mentioned for the Am chord? Right, it contains the A (root), C (third), and E (fifth). This is the order in which these notes appear in the scale of A minor. The chord shapes for piano, guitar and ukulele, which we showed you above, contain these notes. But what if we tell you that we also can play around with the order?

Let’s put the first note — the A — at the end and see what happens: C, E, and A. Try it and listen. Sounds a bit different, doesn’t it? Now it’s the turn for the third note of the A minor scale to stand in the back. This order looks like this: E, A, and C. When we put the fifth note — the E — at the end we return to the initial order. So the circle is complete! These combinations with third note (C) and fifth note (E) in the bass are called inversions.

As you might have noticed by now, each combination generates a new chord shape. So besides the original root position you get two new figures, and all these three shapes are the same chord. Cool, huh? For piano and ukulele, you already saw these inversions in the diagrams above. But what about guitar? “Wait a minute. Why do I need to know so many possibilities just for one chord?”, you might ask. Good question! It means you’re serious about your musical skills. So here’s why.

Why inversions on guitar?

Have you ever experienced that when you’re playing a song, it could be quite difficult to go from one chord to another, because they are far away from each other? Or how about the opposite: you just get bored out by playing a song that is built up out of the same chord over and over again? In both cases, inversions could be the answer. Just imagine that you know different ways for playing the Am chord up and down the neck or the keyboard.

So when it comes to fast chord changes, you can easily pick the one which is closer to your next or previous chord. The same goes for when you have a limited amount of chords that you have to repeat. By using inversions you can travel up and down the fretboard, spicing up the chords, and still playing only an A minor. So that’s why inversions are a great tool for your skill box.

Here are play-friendly inversions of the Am chord on guitar.

One of the great advantages that guitarists have is that they can keep playing an open fifth string for all these chords. Yup, that’s a constant A in the bass which makes it a bit easier to fill in the gaps.

You’ve just learned many ways of playing an Am chord on piano, guitar, and ukulele. Now it’s time to take your instrument and start experimenting with your new skills. Listen to the sound of the inversions we mentioned, and try to apply them in songs you already know. Enjoy, and happy jamming!

All the music theory by Kirill Dumchenko