The guys of together PANGEA from Santa Clarita, California just released their new EP Dispassionate. In the backstage of underground club VERA we talk to William Keegan, Erik Jimenez and Danny Bengston about their new sound, their favorite chords, tips and tricks on how to become better at your instrument, and much more. 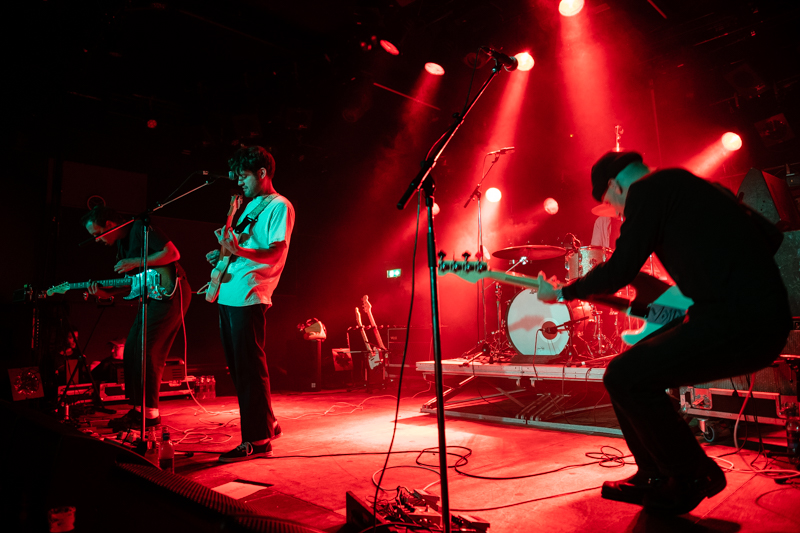 Hi guys! Thanks for meeting with us.

So how is your tour going so far?

William: Yesterday we played in Rotterdam. That was pretty cool and it went really well.

“you are going to suck, but you’ll also get passed it.”

So I heard that before this tour you had a six-month break and that this was the longest period you’ve had time off in the history of the band.

Danny: It wasn’t like an intentional break. We had a release planned, but that got pushed. So the tour got pushed as well. The last time we went on the road together was August last year with Alkaline Trio. Our last show was at the end of December around New Year’s and that was it until June.

It was unintentional, but did it feel good?

William: Yeah! I liked the time off. Touring is kind of hard I guess. It doesn’t seem like it. I’m just like a homebody so being on the road is tiring.

Danny: The first five months for me were great, but after that I started getting a little anxious. 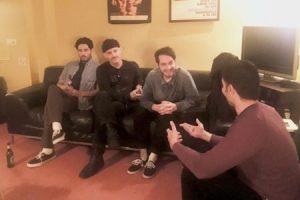 Backstage with together PANGEA

How much time do you guys spend on the road yearly?

William: It depends. Each tour is around a month and we do tours kind of in a row.

Danny: We used to tour at least six months a year in the beginning. But we stopped doing that much touring about a year ago. I think our last big tour was the Bulls and Roosters tour that lasted around five months.

That’s a lot of time on the road. Do you write songs while you’re touring?

William: Not so much. I don’t think I’ve ever written a song on the road.

Erik: [joking] He doesn’t even practice. William only plays guitar on stage. 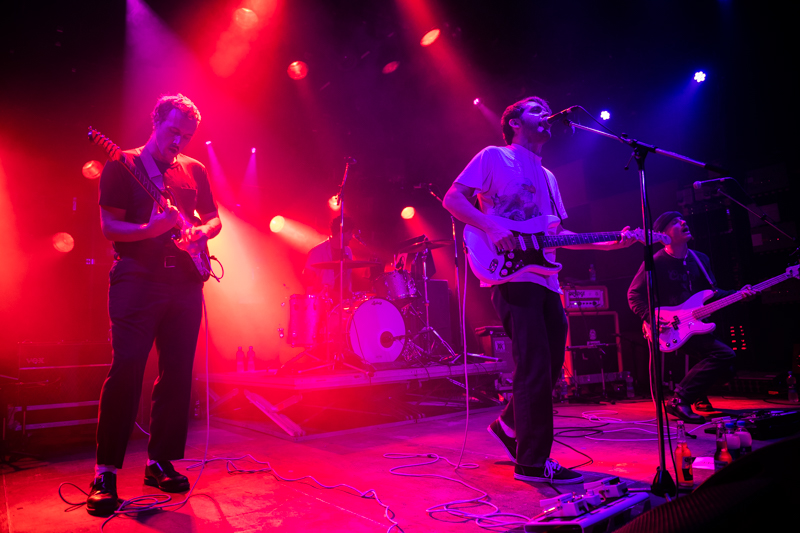 Who does the songwriting in together PANGEA?

William: I guess I’m primarily the songwriter. Danny’s written some songs on the last couple of releases.

Danny: I kind of wrote a song yesterday in Rotterdam. I don’t know if it’s any good. For that I’ll have not to listen to it for a week, and then check it out again. If it still feels good then we’ve got a new song.

“He doesn’t even practice. William only plays guitar on stage.”

So you record it on your phone or some other device?

Danny: Yeah, on my phone.

Can you tell me something about your workflow when you guys are creating a track?

William: I’ll usually come up with a verse and a chorus and then bring it to the band. After that we start writing intros, bridges, and all that kind of stuff.

Danny: But that’s not like the exclusive way that it happens. There have been times where we got together and something happens. But ninety percent of the time William or I come with a verse and a chorus and then we hash it out.

Erik: This all happens during rehearsals. Once we take the songs to the studio it changes in other ways. So, a track can be turned upside down and become something completely different than we first thought.

Here are the chords for “Badillac” by together PANGEA

Can you explain how this happens?

Danny: Sometimes you have rehearsed a song a certain way and when you play it in the studio it just doesn’t sound right. Then you have to deconstruct it and tweak it until it does.

William: You can add new guitar parts, harmonies, and all kinds of stuff to enrich the song.

Do you have an example of a song that was done differently once you started recording?

Danny: “Moonlight Lately” on the new EP. It started out as an acoustic song with a drumbeat, but once we entered the studio we started experimenting. On the final recording it has a saxophone, a glockenspiel, marimba, organ, piano, motorcycle, and all kinds of drum sounds.

Can you get lost in layers?

Danny: Sure. With this song that was kind of the point. I’ve always wanted to see how far we could push it in a Phil Spector wall of sound kind of way. It was kind of ridiculous. We went all in asking the label for a saxophonist and all those things you hear. So when you listen to that track you’ll hear me having fun.

How do you reproduce all that live?

At least can’t you do a Judas Priest entrance, with the motorcycle?

William: Danny thought about it, believe me.

Danny: It’s too big to bring along on the tour, otherwise I would have brought it.

Your new EP is totally different from your other work. When did you decide to stop the garage punk and start writing really nice songs?

Danny: You could look for a deeper reason why we did it, but in the end it’s simple; we just felt like it. When you play music with the same people and write the same kinds of songs for years and years and years, you get bored. So, I think you’d be insane not to try doing something different. This is a fun way to exchange new ideas and explore new sounds.

Erik: Also, the idea behind our EPs is that we can try out, experiment, and have more fun. It’s a very different approach from the way we write when we’re working on a full-length album.

Here are the chords for “Offer” by together PANGEA

William: And I was also worried about people getting the impression that we’re partying all the time – which we still do occasionally. I think we’re generally kind of laid-back guys, but our music doesn’t sound like that. So, I wanted to have something that reflected us more personally.

Danny: There’s no finality. When you make a record, it doesn’t make it the future of your music. We’re definitely going to write loud rock songs again, but not all the time. Otherwise you get bored and recording an EP is our safe space to experiment.

That’s really bold and honest. So now about something completely different: how many hours a day do you guys spend practicing your instrument on average?

Erik: I guess our guitarist Patrick Nolan and I are the only ones that practice outside of rehearsals.

William: Yeah I guess so. Patrick joins us when we are on the road. He obsessively practices scales before the shows. He rehearses all the time. I don’t really rehearse that much, but I play guitar every day for about an hour or two. The big difference is that I don’t rehearse songs; I just play, experiment, and write. For me that’s something different than playing songs just for the songs.

William: That’s right. Do you have enough understanding of the instrument to write with? Well then you can write songs. Some people want to know scales, theory, everything. That requires a different kind of practice. Both ways are valid, but the latter is just not my thing.

When you’re writing songs, do you have favorite chords you like to fall back on?

Danny: It also has to do with vocal range. When I start singing or I come up with an idea in my head it mostly falls back on an A chord and G chord, because that is my vocal range. I feel comfortable singing over those chords.

So, if you could recommend three together PANGEA songs our readers can practice guitar to, which tracks would that be?

Danny: If you’re playing bass, “Badillac” is a good one to learn. It’s pretty straightforward and the bassline makes you explore the chords. You can learn it easily and sound like you’re doing more than you actually are.

William: That song is pretty good for guitar practice too. It has a little bit of lead guitar, but not that much. If you want to rehearse some barre chords “River” and “Offer” are good songs.

Here are the chords for “River” by together PANGEA

Do you have some tips and tricks that helped you while learning to play your instrument?

Danny: I have one! This just blew my mind when I found out. Here it comes: you only need to know an A chord, an E chord, and their minors to play any major or minor chord on the guitar neck. If you move those chords a fret up and use your finger as the guitar nut you just need to know which tone is under which fret and that’s it, that’s the secret behind how to play barre chords.

It took me a while to figure this out, because my granddad was a piano player. He tried to teach me stuff on the guitar, but it all came from a piano perspective. I guess he tried his best, but I just wanted to do other stuff with my guitar. When I learned the hack I just mentioned it just blew my mind. Everything clicked in my head.

William and Erik, do you have a tip?

William: My tip would be to listen to music you like, find the easy parts in there and practice those for a while just to familiarize with the style and the songwriting. This way you learn to practice your pitch as well, and that’s really important when you play together with others.

Erik: Fake it ‘till you make it. That’s one. But, also listen to different kinds of music and don’t be afraid to be diverse in your writing. Sometimes I hear something in a Tool song for example and it just sticks with me, so I slip it in a song we’re writing even when it has nothing to do with the style we’re composing in. Challenge yourself.

“We sounded like shit for years. Things started to get better when we began to use tuners.”

I saved the best for last. Here’s a dilemma: play nine times on stage and rehearse once versus rehearse nine times and perform once in front of a crowd. What’s it going to be?

William: This is a trick question isn’t it? When you play on stage without rehearsing you’ll sound like shit, but when you rehearse more than you actually play, you’ll have a lot more stage fright.

Danny: I guess that you’ll always sound like shit the first time you play on stage. I don’t know any band that played their first gig and killed it. We sounded like shit for years. Things started to get better when we began to use tuners.

Erik: Can you imagine we used to tune our instruments by ear. Talking about practicing your pitch, well ours wasn’t that advanced.

William: Oh man, we really did sound bad. And we did that for three years. So the take away from this story is: don’t be scared and keep on going. Because you are going to suck, but you’ll also get passed it.

That’s a hell of an advice guys. Thanks for having us!