After an energetic session in our Chordify x IDK Studio on the Vismarkt during Eurosonic, we had the chance to talk with bassist Jon, and guitarists Will and James from the punk band Bad Nerves. Our conversation covers everything from tips for performing to why wearing a helmet on stage sometimes seems like a good idea.

How is Eurosonic treating you guys?

Jon: Amazing. Eurosonic is treating us really, really good. We heard it was one of the best festivals of the year and it didn’t disappoint at all now, did it?
Will: No, it was amazing.

How many gigs did you play during the festival?

Jon: We did an acoustic set for KINK radio.

Wait, what? You did an acoustic set?

Jon: Yeah, this was the first time we’ve ever done this actually.
Will: It went better than we thought. We didn’t really practice it, but kind of winged it and it came out alright.

“We do practice, but not that much.”

Well, now that we’re on the subject of practice. I read in an interview that you guys only rehearse the day before a show. Is that a myth?

James: Who told you that?!
Jon: That’s no myth. Usually, it’s because we’re quite lazy. [laughs] We do practice, but not that much. Some bands rehearse, like, almost every night. That’s not us. If you over-practice, you take out the spontaneity of it all. Punk, after all, is meant to be rough around the edges.
Will: We’ve been playing these songs for a while now, so we know what we’re doing.

Do all of you come from a punk background?

Jon: Not everyone.
James: Not really.
Jon: But I would say that as a band we mainly listen to kinds of punk; ranging from old stuff to some of the newest stuff like Radioactivity. Besides that, we like blues and rock ‘n’ roll records. 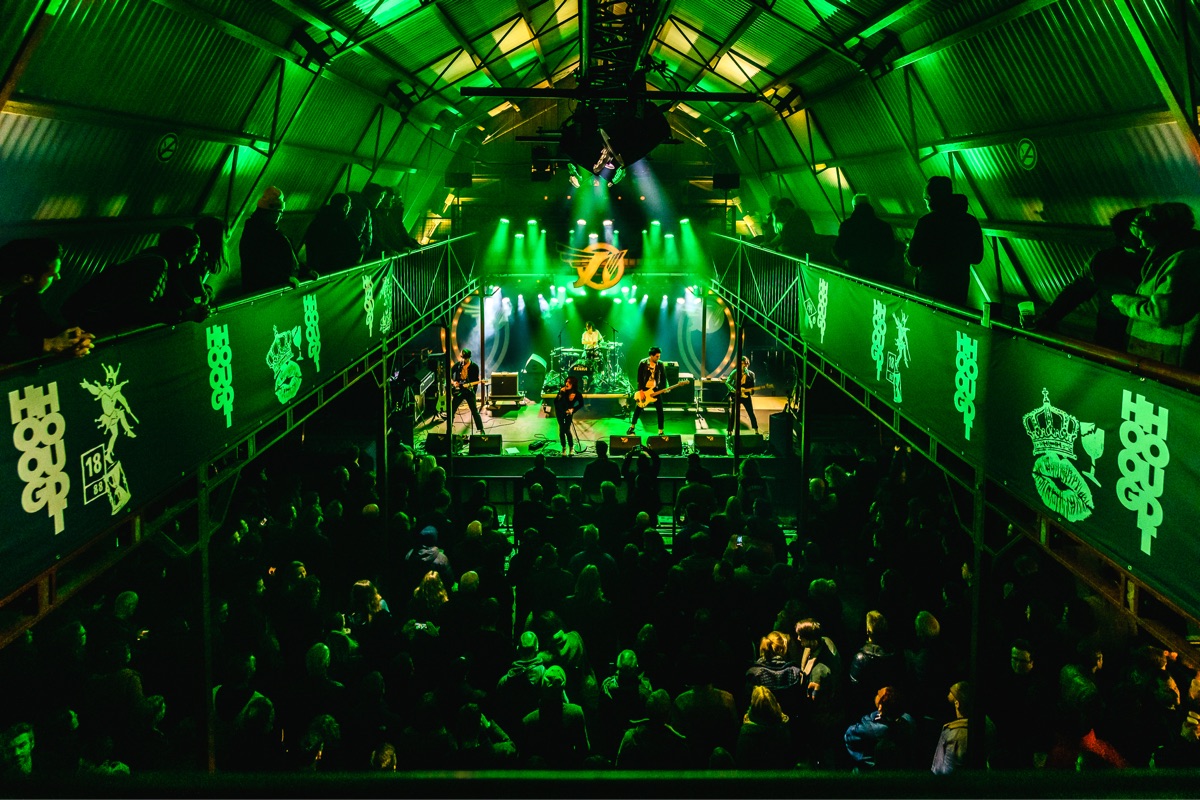 Cool. Can you tell us a bit about your songwriting process?

Will: Yeah, basically me and Rob usually get together and I play some riffs while he sings and writes the lyrics.
Jon: Yeah, Will and Bobby lock themselves away and come out with a bunch of great songs. They give them to us and we finish them. That’s pretty much it, isn’t it?
Will: Yeah.

That sounds like a solid system. Do the songs change a lot after you guys go into the studio?

Jon: I don’t know, because a lot of stuff is kind of demoed first. Later, songs do change a bit but not drastically. We strip down music anyway.
Will: We essentially write the song, but after that everyone else puts their flair on it.

What’s the most useful thing you’ve ever learned about your instrument?

Jon: I’m still learning.
James: What I’ve learned… I guess not to fuck up.
Will: My only fear is equipment breaking. 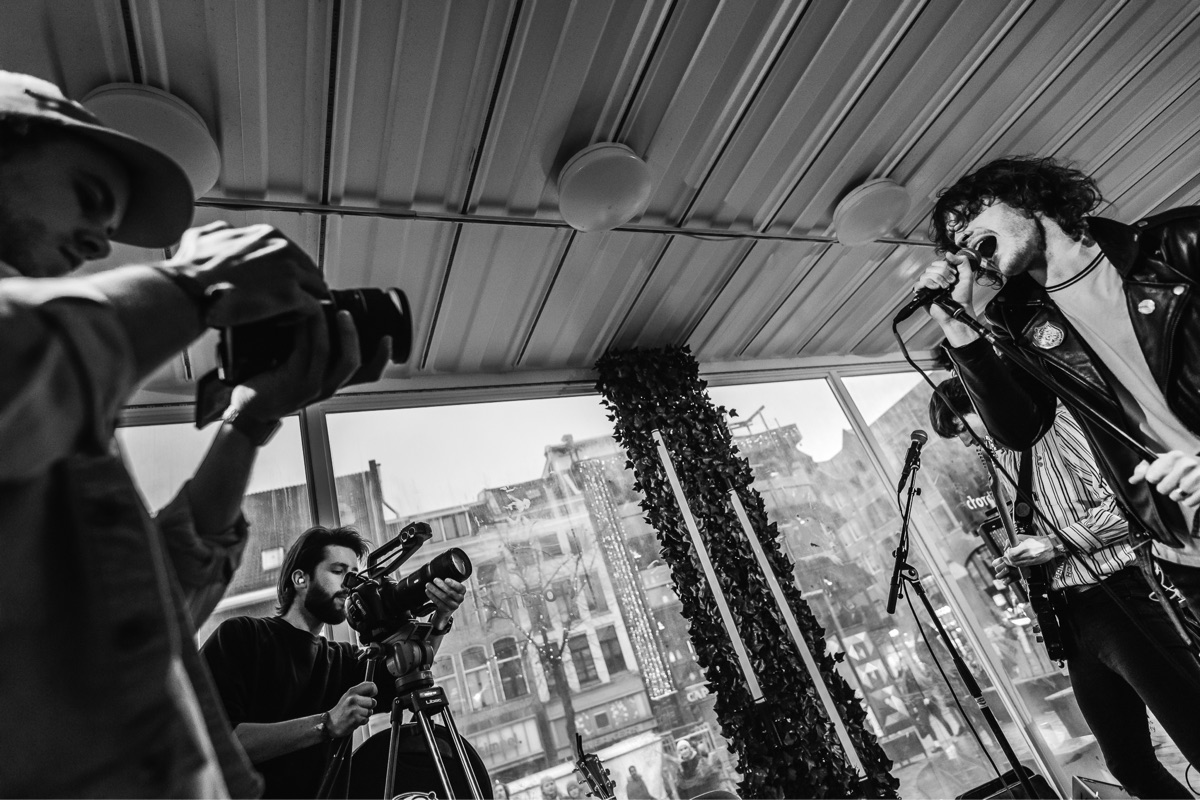 Does this happen often?

Will: Yeah, it does happen more often than you’d like it to. And when it does go wrong, we don’t have any guitar techs with us, so we have to fix it ourselves.
Jon: It’s the only dread we ever have. There’s nothing more annoying than playing a hundred miles an hour and your equipment breaking down. That’s just a vibe kill.

So, what’s the worst thing that has ever happened on stage?

Jon: My guitar strap fell off. I was hoping Bobby would fix it, but he didn’t. So, I stayed on one knee for a whole song as if I was proposing.
James: That was Lowlands wasn’t it?
Will: Yeah, I remember that.

“the simpler it is, the better it is for the vocals.”

Do you guys have favorite chords or keys you like to use while writing songs?

James: Major barre chords.
Will: Yeah, everything essentially starts with a few chords; just keeping it simple. That’s one thing we’ve learned: the simpler it is, the better it is for the vocals. This is a lesson learned throughout the writing process.

What do you hate most about the music industry?

James: Not replying to e-mails.
Jon: We don’t have super bad experiences with the industry. I just think, in general, that guitar music and England is not what it was. The U.K. is known for its guitar bands. Nowadays, when you go to a festival, there’s a lot of electronic music and, if you ask me, not that many guitar bands. That’s what’s missing in the English music industry at this moment – for me that is.
James: But all this will change with us.

Yeah, are you going to play ten hours straight on every festival in the UK?

James: Sure. We’re not going to sleep. At all. [laughs]
Will: But Holland loves us, that’s why we keep coming back.
Jon: I love Holland. 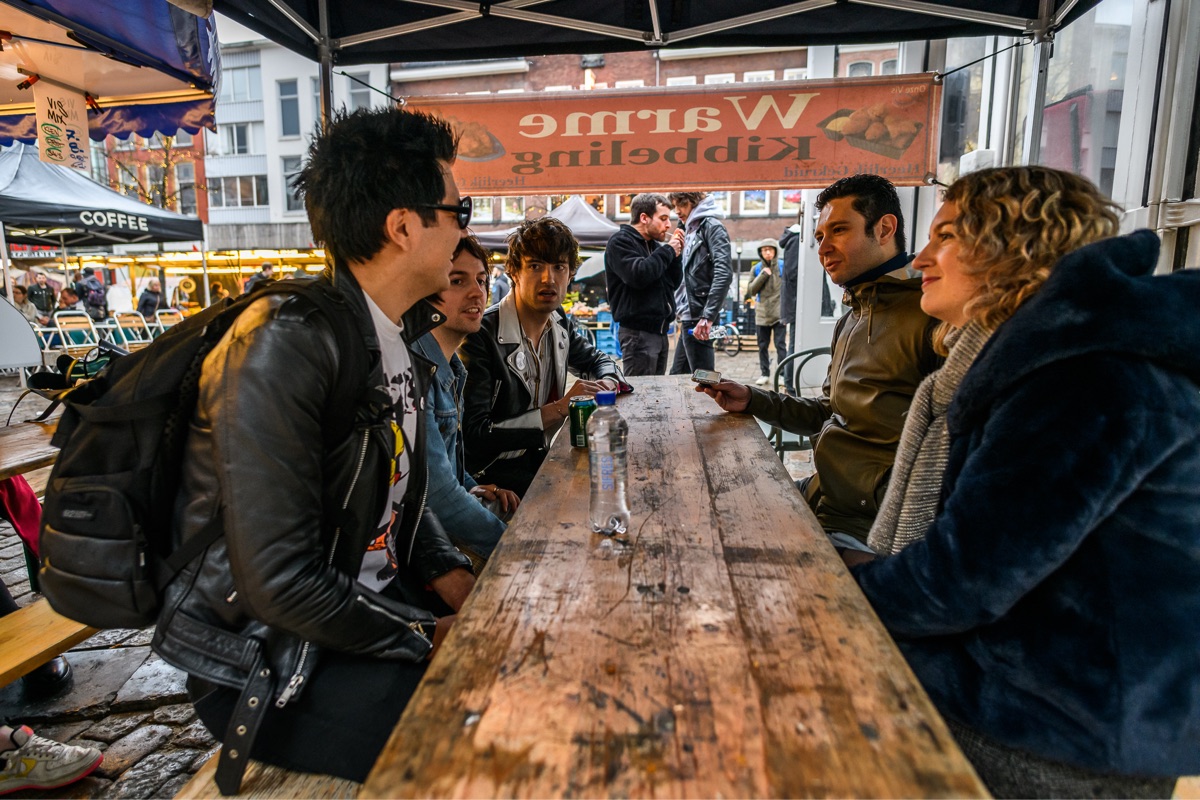 Which two of your songs would you recommend our readers to play along with?

Will: To play along with? That’s a good one. I think “Radio Punk.”
James: “Can’t Be Mine.”
Jon: “Wasted Days.” But why not try all of them? That’s how I learned to play the bass. I just played along with my favorite records every night. This is the best way to learn, I swear. It’s fun, because you’re listening to your favorite records the whole time. And once you’ve figured them out, you play along. That’s the best part.

How did your live performance evolve to this?

Jon: What do you mean? That we jump around and annihilate stages? [laughs]
Will: It kind of evolved into this. We’ve played so many gigs and each time we want to give it our best, so this is what our best looks like.

“I do worry about him sometimes. I think he should wear a helmet.”

Has Bobby ever broken something on stage?

Jon: Oh yes, stuff gets broken all the time. But I guess you mean if he ever has broken some part of his body? Well he did break his arm, but that was not during a gig. To be honest I do worry about him sometimes. [laughs] I think he should wear a helmet.

We’ve arrived at the final question. Do you have any tips for beginning musicians?

James: Keep it simple. Don’t stop.
Will: Start simple, don’t try to be too clever. Play with other musicians. Working together is the main thing.
Jon: Play what you love. That’s the way you’ll get better. Even if you can play only one note, just get out there and start a band. That will make a real difference for your skills and the way you experience music.

Thanks guys! Enjoy your stay in the Netherlands.

All: We will, thank you!

Chordify x IDK - Are you ready for awesome live…
ESNS 2022: A digital spectacle