Can you imagine seeing a band every day during their European tour and being treated to a different setlist on every occasion? You would think that it’s comfortable for a band to stick to a regular, unchangeable setlist for the entire tour. In the 25 years that I’ve been seeing Pearl Jam live, I found out that nothing is further from the truth. Every concert is a surprise, and every day offers different songs. I’ve followed the band around for years now, and each gig has been a surprise.

This goes for the band, but it also goes for the lead singer Eddie Vedder. How they do it? Read on to find out … 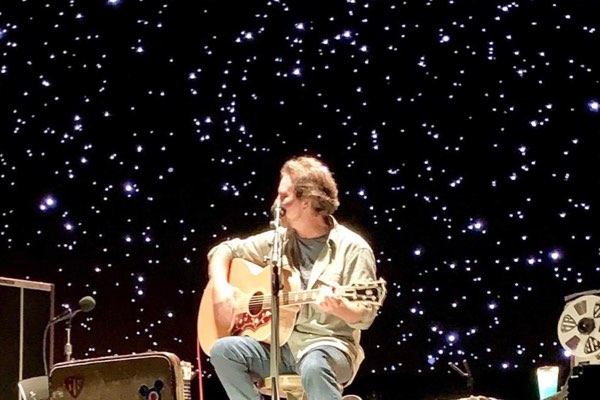 Pearl Jam’s frontman has been active for a while now, producing albums and playing live shows. This spring, the kick off to his solo tour will take place in Amsterdam, the Netherlands. He will be playing acoustic Pearl Jam songs, and music from his solo albums: Into the Wild and Ukulele Songs. Waitwhat? Ukulele? A guy this big on an instrument that small? You betcha! Songs by himself as well as covers, but more about that later.

The shows by Vedder are the same as Pearl Jam’s: always a surprise. At a Pearl Jam gig the audience never knows what they will get, and Vedder adheres to the same method. There are a few regular elements, but the majority of the setlist is thought up on the spot or altered just before the show.

To give you an idea, in 2017 Vedder played three nights in a row in the Netherlands. On those three nights he played a total of 85 songs, 60 of which he played only once. He performed only six songs every night, on a set of 28 on average. Like the Pearl Jam classic “Porch” or their latest hit “Just Breathe.” You can find the list of most likely to be played songs at the bottom of this blog.

Just like at his latest tour, Vedder is not alone on stage. He will be backed by the Dutch string quartet Red Limo String Quartet, whom he met during one of his shows in Amsterdam. They had played a few songs together, after which Vedder invited them, on the spot, to come along for the rest of the tour. Now they’re an intrinsic part of the show; they’ll come along on the podium tour as well. They kick off in Amsterdam and finish on the famous Wembley podium in England. There, they will be joined by Eddie’s heroes from the sixties, the guys from The Who. There’s a good chance that he will play a few covers, like “Baba O’Riley,” “I Can’t Explain,” and “The Kids Are Alright.”

No sad chords on the ukulele

The ultimate solo show by Vedder is mainly for listening, and for enjoying the music and his idiosyncratic voice. These shows are more than just a bunch of songs played in sequence. Vedder laces them with stories, ideas, thoughts, and world views. It is less like a concert, and more like staying at a friends’ house. Moreover, the podium is covered with old travel cases, a tape deck, speakers, and all sorts of memorabilia from Vedder’s past. 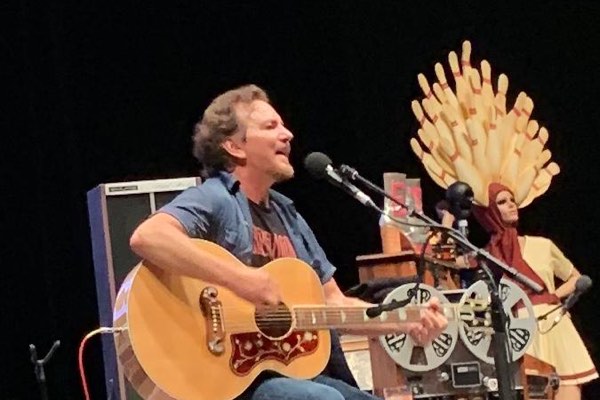 Right before his 2017 tour, Vedder’s best friend died, Chris Cornell (lead singer of Soundgarden) and that had its effect on the setlist and also the reactions of the crowd. When Vedder plays, it’s always with passion. He throws his heart out on stage, and shares personal stories with the audience. On one occasion he talked about a night where he was working on his Ukulele Songs; there was a ukulele in the corner of the room. He had friends over. One of them was Chris Cornell. At a certain point, Vedder states that the ukulele doesn’t have a “sad chord,” and Cornell takes the bet. Hours later, when everyone’s asleep, Chris is still on the balcony, trying to find the sad chord. Eddie’s with him, and together, they come to the conclusion that it might just be true. It frustrated Cornell, but it didn’t hold back Vedder to carry on with his Ukulele Songs. Better yet, in a later interview he explains that the happy sounds form a nice contrast with the gloomy lyrics.

Every setlist is different

You wouldn’t expect one of the biggest rock singers in the world to pack a ukulele for his tour. But you can be sure of special night, with a very special singer. With a unique and surprising setlist. Want to get into the mood by practicing some songs already? I have listed a few that will probably be played.

All these songs can also be found in the special Eddie Vedder Channel. Will you be visiting one of Eddie Vedder’s concerts this summer? Let us know which unique songs he played and whether you can play them on ukulele or guitar. We’re curious to know!

Want to play along with more songs? Check the Ukulele Channel or the Chris Cornell Channel.

Eddie van Halen: the greatest rock virtuoso of all…
Black Sea Dahu is always on tour