During Rockit festival, we had the opportunity to speak with GoGo Penguin’s bass player Nick Blacka and pianist Chris Illingworth. The trio from Manchester is known for their interesting and jazz-transcending compositions. Some compare them to Aphex Twin, others to Debussy.

We were curious about their inspiration, the way they work, and what drives them. One thing is clear: the mixture of different tastes leads to a special kind of synergy for which GoGo Penguin is known.

Do you remember the first time you picked up a bass guitar?

Nick: “Yes. I first played my friend’s Rickenbacker 4001 bass guitar in his band rehearsal at school and I thought it was the most amazing thing ever. I was obsessed with getting a bass guitar for myself as soon as possible after that. I couldn’t think of anything else.”

Did music come naturally to you, or did you have to work harder than other musicians?

Nick: “I think it did come naturally, but that only goes so far before you need to work hard to develop further. I was so obsessed with it, that it’s difficult to differentiate between talent and hard work because I just wanted to play all the time anyway.”

Chris: “It was a similar situation for me too. I started playing the piano when I was 8 and just loved it from the start, but it soon became clear how hard I would have to work to get where I wanted to be on the instrument. 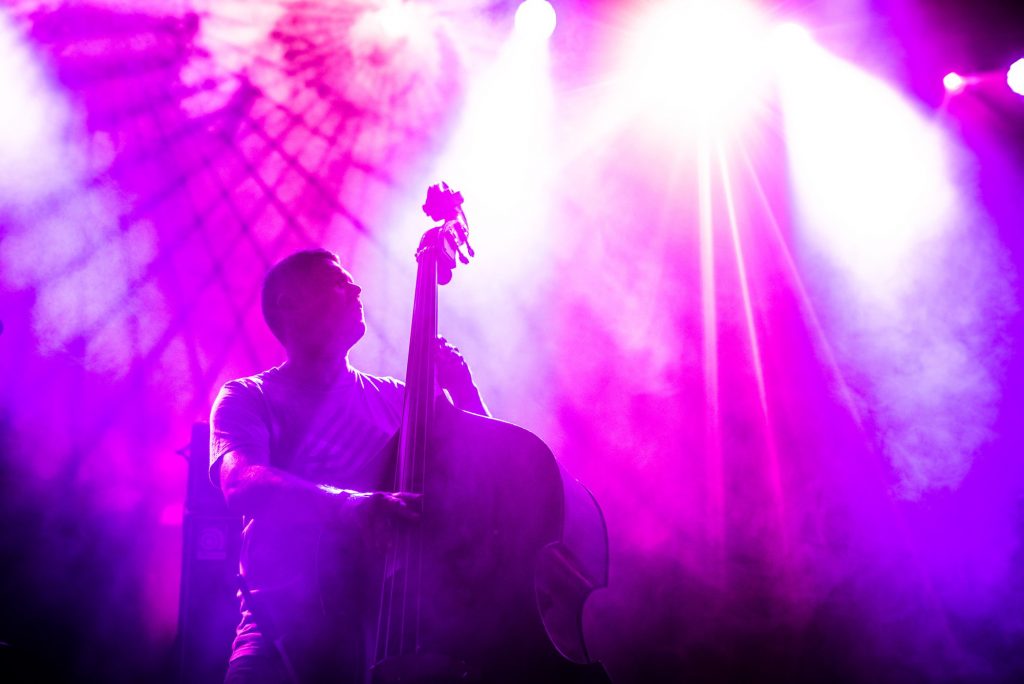 “There have been ups and downs, moments when you doubt yourself, wondering if all the hours of practice will pay off, but I knew right from the start that I wanted to be a musician and I’ve loved every minute of the journey.”

What are the coolest three riffs you’ve ever played on a piano?

Chris: “That I’ve ever played? I’m not sure, but there are some really great parts to play in a lot of the tracks from our last album. I’ve been experimenting a lot more with extended techniques and effects over the last year (and a bit). On “Bardo“, for example, there’s a line I play at the start that mimics a synth, but without any electronics.

“I really like the bass line Nick and I double-up on in “Reactor“, the combination of piano and bass in that way always sounds heavy. And in “Window” I tried to create a sort of mechanical music box effect by combining the piano riffs and drums towards the end of the track.”

After all these years of playing, do you still think you can keep on learning?

Nick: “Absolutely, music is an endless journey. There’s always more to learn or weak spots to improve on. Sometimes it’s frustrating if you want to learn a specific technique that you haven’t mastered yet but you just have to try and learn to enjoy the journey.”

You’ve been compared to artists such as Aphex Twin and Squarepusher, but also to composers like Debussy and Phillip Glass. Which comparison do you like more and why?

Chris: “I don’t think there is a particular comparison we like more than others, it’s just great to hear that everyone finds something different within our music. The three of us each have our own musical tastes and preferences, we’ve all come from different musical backgrounds, and it’s that variation and combination of ideas that makes GoGo Penguin sound the way it does.”

Who would you like to jam with most, but haven’t had the opportunity yet to do so?

Chris: “On a couple of recent tours we’ve had a friend of ours, Daudi Matsiko, as our support. He’s a fantastic singer, guitarist, and lyricist and it would be great to collaborate with him sometime.”

If you weren’t a musician, what would you have become?

Nick: “It’s very difficult to answer, as music is the only thing I’ve really ever been interested in. When I was really young, I wanted to be a chef so maybe that.”

If you had to choose three chords which chords would that be?

Nick: “Probably a gig in Birmingham a few years back. It was a sold-out show and we celebrated afterward with a little too much gin. We don’t really remember too much of it. I lost a shoe and we had to go back the next day to collect it.”

Do you guys have a guilty pleasure? Don’t be shy, and tell us even if it’s Vanilla Ice.

Nick: “‘The Power of Love‘ by Huey Lewis and The News. We made a playlist for driving through California on our first US tour consisting of ’80s pop classics. This reminds me of that tour. It’s also in “Back to The Future,” so it also reminds me of my childhood.”

Chris: “’Seven Days‘ by Sting. Joe, our sound engineer, uses it as one of his tracks for checking the PA at venues, so I get to hear it a lot.”

Foto by Knelis made at ROCKIT in De Oosterpoort. Did you miss GoGo Penguin at ROCKIT? No worries, check the bands’ tour dates here.

The festival bands that would have been the crème de…
Chordify Backstage: The Bloodhound Gang