The Irish singer songwriter Luka Bloom is one of the first independent musicians in the music industry who started selling his music online. He released his latest album “Sometimes I Fly (Live in Bremen)” which is an old recording from 2001. 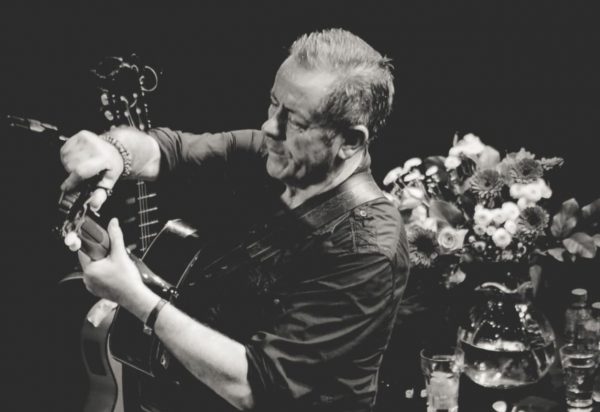 We spoke with Luka Bloom after one of his shows about the new record, the music industry and lessons learned as an independent artist.

Your latest record is just released but it’s recorded in 2001. That’s funny isn’t it?

“For me 2001 was a busy year. I was on tour all the time. So I arrived in Bremen to do a show, the next day was off to Hamburg, the day after I went to Munich and so on. Very busy times and I totally forgot about this gig. Now seventeen years later someone rings me up and asks if I’m okay with releasing a live record which was recorded in Bremen.

Of course I didn’t remember it and didn’t know anything about a recording of that show. Then they send me the recording and it sounds amazing. They use all those old German microphones which have that warm and clear sound. The recording sounds amazing! So that made me enthusiastic about it and now I’m really happy this album is released.”

I heard you say that you are your own manager and producer. Isn’t it strange to get a record out of nowhere?

“It’s a gift! It is very unusual, because normally I have to work really hard to create an album. So when this idea came initially I wasn’t too sure about it. Releasing a recording of an old concert is nostalgia, and I’m not into nostalgia. I am more in the future. The thing is seventeen years old, why should I be interested in that? Until I heard it.

And the I thought that it’s probably okay now and then to stop and look at something you did seventeen years ago and say: “You know what? This is pretty good!” That was a good moment. It’s nice to be able to release a record that didn’t cost me twenty thousand euros.”

“It’s my only instrument. I tried playing the piano, but the moment I had a guitar in my hands I knew that was it.”

Do you remember that moment?

“I remember the first moment I held a guitar. I was nine years old, my brother came home from England and he had a guitar. I remember holding it, putting it on my knee. This might sound a bit weird, but it felt like a home coming. After that for years I went to bed with the guitar by my side.

In between school hours I had a special hiding place where I used to go and practice my instrument. So the class would end and all I could think of was something I had played that morning and how I could improve that. I had a guitar hidden at school so I used to play for a few minutes before the other class would start.”

Where did you hide your guitar?

“I had hidden it in a storage room filled with nothing but suitcases.”

Where do you hide your guitars these days?

“Ha, I’m not hiding anymore! If you come to my house you’ll see that I have three guitars in the kitchen. Actually you already saw them during my performance. Well, when I go home that stand and those guitars are standing in my kitchen.”

And now we’re on the topic of guitars, that last one you played on had such a full and warm sound. What kind of a guitar is it?

“Everywhere I go I play with three guitars and I like them to be very different from each other. Because when you’re a solo artist you like to create a little bit of momentum. So I want things to be different, I don’t want songs to sound the same. That is why I always have three guitars with me which all three have a very different sound.”

“So the last two guitars I played on are made by the same guy. His name is George Lowden and he’s a really amazing guitar maker. If you’re interested in guitars and you go into Lowden guitars I’m warning you, be very careful. If you’re not, you will end up spending thousands euros on those things.”

What are you’re favorite chords if you had to chose?

Why the G minor?

And what is it that makes C major so appealing?

“The C chord is a really full open deep chord. But there is one thing I have to add. When you ask me about my favorite chords you have to know that I don’t play guitar in normal tuning. I use made up tunings. When I say C major you hear that in a certain way, but for me it’s a different sound.”

What do you mean?

“The first Spanish guitar that I played tonight is tuned down to C. This means that the strings from low to high are tuned in C, G, C, F, G, C. This is what we call an open C-tuning. So when I strike the strings you hear a C major.”

“Now that is a different C then when you play it in E-tuning. It has a deep bass and a nice ring, it’s almost like reggae. I love it. And it is a good contrast to my voice. Because I don’t want to be in a band I have to create a full steady platform for my voice and the open tunings really help me with that.”

“My first real guitar belongs now to my nephew. He lives five minutes from me. My mother wanted me to go to university and I tried, I really did. But my heart wasn’t there. And when she eventually excepted that I wasn’t going to be a lawyer or something like that, she gave me a cheque and said I had to go and get myself a good guitar.”

“So I got on a bus and a boat to London and I went into a street called Little Dean Street. This was the place where all the guitar shops were. I forgot the name of the store, but I vividly remember that for the first time in my life I saw four walls full of guitars. That was in 1974. So there was one wall full of Guild guitars, one with Martin guitars, one with Gibson guitars and so on.”

So how did you choose?

“The first instrument I picked up and played was a Guild D-40. Immediately I thought to myself that this was so amazing. But if this guitar sounded so incredible surely the other instruments would be even better. So I tried almost every guitar they had in the store and came back to the first one.”

“Now my nephew has it. You know, I don’t like storing guitars. I mostly give them away. Hanging an instrument on the wall as decoration just isn’t my thing. Guitars are to be played, not to be looked at.”

You’ve been around for so long in the music industry. What are the biggest challenges you’ve encountered in the business?

“Man, where do I begin. I have had so much challenges, so much failure, so much rejection. The first fifteen years I barely survived, I barely made a living. And then there was a period between 1988 and 1992 when I suddenly became quite successful. So from 1992 until now really I’ve been pretty successful.”

“In the beginning of the nineties everything seems to begin for me, but everyone forgets I was already a musician for fifteen years by then. That’s a long time, but suddenly it just happened. So that was the first big challenge.”

“Oh yeah, there are plenty more. The second biggest challenge was in the beginning of the nineties. I was with Warner Brothers for three albums and then they dropped me. So this is back in the day when if you didn’t have a recorddeal you couldn’t make a record. Nowadays everybody can make their own records on a laptop, but back then in 1995 it wasn’t like that.”

“Fortunately I got a recorddeal with Sony, or so I thought. But they really f*ck*d me over. I had a good experience with Warner Brothers, we made three albums and I wasn’t selling enough for the third one. I was bit sad about that because I liked working together with them, but the sales weren’t great so they let me go. I never was angry with them, there we no hard feelings there.”

So what happened with Sony that was so different?

“Now Sony is the McDonalds of the music industry. I just don’t agree with what they stand for. Of course I had the chance to make an album which took me three years. And yes, I recorded it in Abbey Road where The Beatles used to record their songs. But three months after the record came out I knew something was wrong.”

“Nobody spoke to me. Nobody called me up to say that they didn’t want to work with me anymore. They just abandoned me. So that wasn’t the biggest challenge. That was the rock bottom which led to the great new beginning.”

“So I found myself in 1998 with no recorddeal, and I knew I didn’t want to have a recorddeal ever again. But I had to find another way to be in the music industry without being dependent on a record company, feeling like a snake and having to talk or deal with all those horrible people – with which I didn’t have anything in common. All they think about is money and I just want to make music.”

“So then I met this guy who was the first man in Ireland who started selling his own music on a thing called a website. This was in 1999 mind you –  that year I got y first computer. Now the second Irish artist to sell his music online was me.”

That that must have felt great.

“Yes it did. From that period on I’ve been a completely independent musician. I’ve made fourteen albums all by my self, released them all myself, sold them all myself – which is great. But coming to that moment was my biggest challenge.”

“When I left Sony I thought my career had ended, but it hadn’t. It had just began. But I had to get tough and I had to learn how to do things. I had no interest in learning anything about websites and computers, I just want to make music. To be honest I still don’t understand technology. You said that Chordify is an algorithm, I have no idea what that is. But I engage with technology as much as I need to.”

What is ‘as much as you need’ mean?

“Well, when I finish a record I announce it on my website and on social media platforms like Facebook. I can get by with technology using the bare necessities and the most important thing is that I can make my own music and release my albums on my own turns.”

Do you have any advice for starting musicians?

Thanks Luka! Have a good one.