Recently one of the biggest rock bands ever released a movie based on their adventures in the eighties and nineties. “The Dirt” tells the story of Mötley Crüe; the rise and reign of glam rock. This flick got us thinking.

When did this genre start? Did it ever end? And how can you play the guitar like a real glam rocker? Because if your guitar’s fresh-out-the-box and you’re looking for a simple and effective way to play along to your favorite music, Chordify’s the place for you. In this blog we’ll slowly but surely inspire you to go from zero to glam-rock guitar hero.

In the seventies, there was a group of musicians that were bored with the mainstream, which was dominated by bubblegum rock, rock ‘n’ roll, and folk. What do you do if you don’t want to get in line? You form your own line and rebel, and you start questioning traditions and kicking against the institutions that symbolize them.

One of the major issues at the beginning of the seventies where traditional gender roles. So going against the grain meant reversing and deconstructing these roles with your show, performance, and wardrobe.

Around this time, bands like T-Rex, David Bowie, and Slade are starting to turn up on the scene with extravagant clothing, make up, and androgynous displays that are central to their act. Bowie is the one that made it out on top of the seventies, to become a big star.

But bands like Slade, in their turn, inspired Def Leppard, Kiss, and Bon Jovi to carry on the soul of the glam rock. Harder, more riff-oriented, and taking the androgynous to higher levels – more hair, more drag. During that time, the glam-rock sound crossed the Atlantic, and entered America.

In America this new sound is transformed into a new genre, by Kiss, Van Halen, and godfather of glam, Alice Cooper. The extravaganza is turned up even higher. Men are wearing spandex, make up, and female blouses and tops.

The music is overflowing with harder guitars that take over the sound from heavy metal and punk, and it is imbued poppy vibes. The riffs are heavy, but set in major mostly, and the choruses have catchy hooks, so the crowds can chant along. Most lyrics are funny and contain lots of suggestive sexual language. 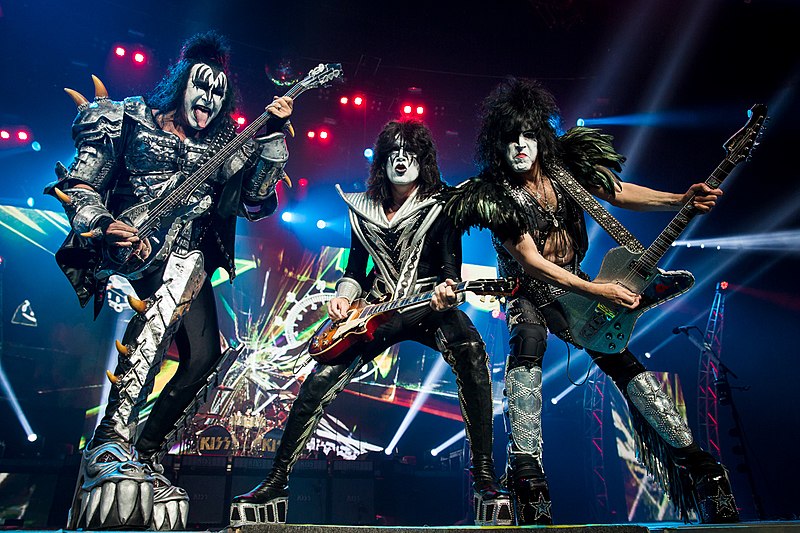 How chords are used in glam rock boils down to a few simple rules.

The most important of which is the use of power chords, which is a harmony between the key and the fifth interval. That’s a great way to start learning about glam rock songs.

Do want to throw in some poppy vibes? Than you can expand the power chord with an extra note, a suspended fourth (sus4). This means that you replace the third tone by the perfect fourth, which is the fourth tone of a chord.

How do you use the sus4 chord

Let’s put everything into context. Get out your guitar and start jamming along. First, with one of the earliest pre-glam tracks, “Get It On,” by T-Rex.

You can’t say glam rock without Alice Cooper. He has been an example for both glam rock and metal. During his show this man did everything to shock his audience. Some people say that he inspired David Bowie to develop his Ziggy Stardust character. Play along with “Poison”.

Now that we’re on the subject of Bowie, why don’t you just jam along with “The Jean Genie.” A song that’s very much suited for beginners, with chords like A, B, D, G, and A.

Ratt – Round and Round

One of the glam-rock bands from the eighties is Ratt. With their uplifting sound these rockers have score a lot of hits, one which is “Round and Round.” Tune your guitar down half a step, or transpose the song a semitone higher. Jam along with “Round and Round.”

We have said it before, “The Dirt” by Mötley Crüe gave us the idea for this blog in the first place. You can’t ignore this music, whether you like it or not. They bring glam metal to new heights. While Steel Panther is a caricature of bands like Mötley Crüe, there’s little that can top the original. Try playing along with “The Dirt” yourself.

Death To All But Metal – Steel Panther

Steel Panther carries on the legacy of Alice Cooper, Kiss, Def Leppard and Mötley Crüe. It is the absolute pinnacle of the genre. The only thing you need to do is pull out your six string and rock it out on “Death To All But Metal” by Steel Panther. Happy jamming!