Stay Homas became an overnight legend on social media. The three roommates Klaus Stroink, Guillem Boltó and Rai Benet from Barcelona turned the lockdown world upside down with their happy tunes, jazzy chords and playful songs. In a few weeks they recorded 30 tracks from their balcony, got a record deal with Sony Music, and Michael Bublé covered one of their songs. We decided to give them a video call; Klaus picked up.

Wow, the sun is shining at your end!

Yeah, it was a rough week, though. Now it’s really nice. No sun in the Netherlands?

I’m afraid not. But hey, we still have the Stay Homas tracks to lift our spirits… Last few weeks you guys played for the first time in front of a live audience. That feeling must have been amazing.

Oh, yes it was. Pretty strange at the same time, too. It’s weird to look at people sitting six feet apart, with masks on, not allowed to stand or dance. You just don’t see their faces. [laughs] We have actually been playing live since July. Last week for the first time, we did some shows outside of Barcelona: We left Catalonia and went south to Malaga.

You’re right, it did feel amazing. It’s one thing to see a lot of followers on Instagram, but it’s a whole different thing to actually see real people enjoying your music. So that was great.

Shows are also good because that’s the way we can make a living as musicians. We’ve been playing since we were very young, around 17 or 18. When Corona struck, our income disappeared. Of course, having a lot of people liking your stuff is cool, but you can’t eat followers. [laughs]

So, you guys were professional musicians before the lockdown?

Yes. Guillem Boltó — the guy with the man bun — is actually a trombone player; I studied to play the trumpet; and our guitarist Rai Benet’s main instrument is the bass. We studied together at ESMUC (Escola Superior de Música de Catalunya), which is one of the conservatories of Catalonia. Rai and I used to live together before. So when a spot opened in this apartment, he joined us, right before the lockdown. Otherwise we would have been just the two of us, or maybe with someone else.

Everything happens for a reason… Do you have plans for after the lockdown?

We have written a lot of songs. Some are good, some not so good, but we really enjoyed doing this. The thing is, are people going to sing about the lockdown after it’s over? I don’t know. We are now in our home studio recording new songs, so we keep busy.

What are you working on?

Well, we’re trying to play more of our main instruments, and we’ve asked other friends and colleagues to do things such as the drums and guitar. They all send their tracks from their home studios to us, and we record our parts: bass, brass and vocals.

So, no more balcony recordings?

[laughs] It’s funny because when we started out, we recorded everything on an iPhone and, to be honest, the sound on that thing was really good. The only problem was that after the full lockdown was lifted, the streets of Barcelona became crowded and busy again. That was the moment we realized how quiet it had been all this time. Now we had to use other ways to record our songs. So we experimented with different stuff. 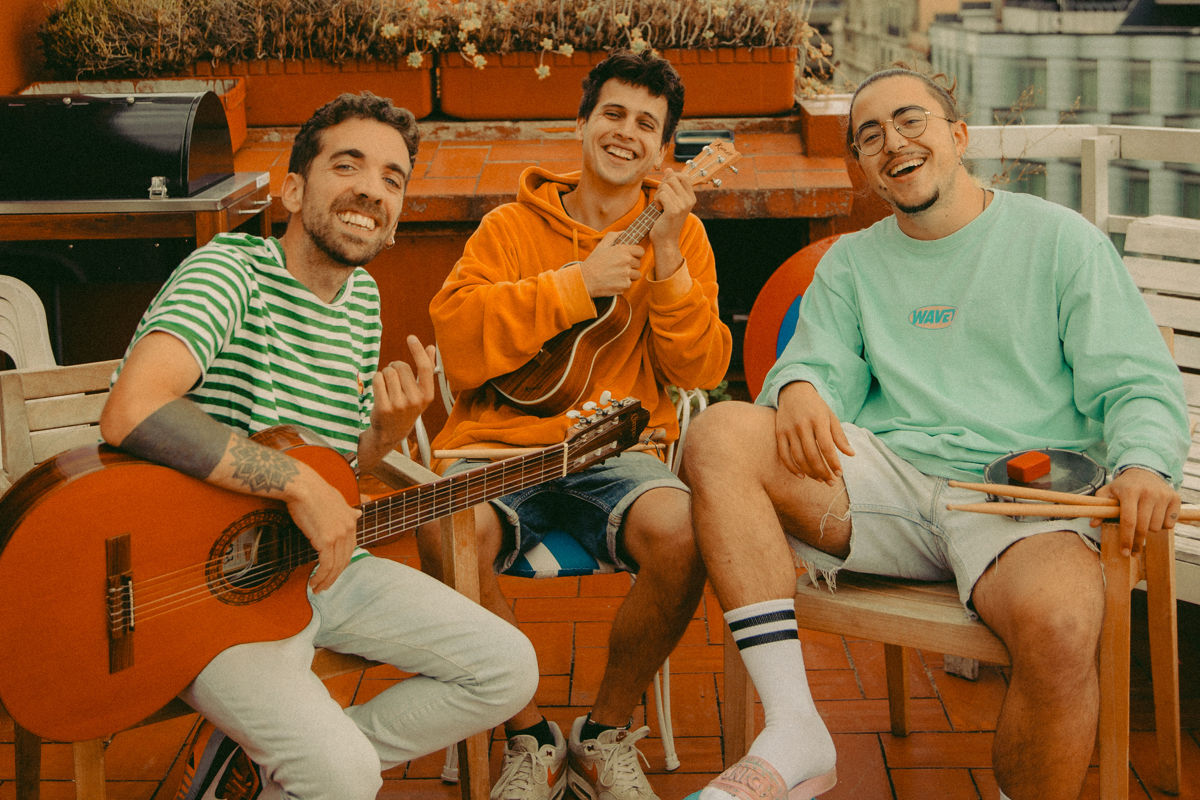 At one point, we got sponsored with a camera to record our songs. The camera came with a microphone, but we didn’t really like the sound it recorded; we used the iPhone again. Another time, we used the iPhone to show the people with whom we did some collaborations. We also recorded the guitar with the phone and mixed it in later. That’s about the most we experimented on the terrace.

Your songs sound very colorful and full. Do you have favorite keys you like to play in or chords you fall back on?

[Thinks for a while] Keys to play in, yes. Chords … not so much. A chord is just a chord, it depends on the other chords that surround it if it sounds cool or not. So, I would say my favorite key is E-flat minor (Ebm). [Smiles] But that’s not a practical scale for guitarists to play in. So, I would say A major scale. We have quite a few songs written in that key anyway, like “Stay Homas,” “Gotta Be Patient” and “Another Love Song.” Wait, I’ll ask Rai if he has a favorite chord, he plays the guitar after all.

[disappears for a while and returns with a smile]

Ah yes, Rai says he loves the D flat major (Db). To understand our songs, you need to know a bit about musical theory because we actually use a pretty straightforward chord progression. So if you have a scale, we take the first note, the fifth, the sixth and then return to the fourth. As an example, let’s say you play in the key of A: You start off with an A, then go to the E chord, after that to F#m and then return to the D chord. To spice it up, we sometimes throw in some jazz influences by going through the second note to the fifth and then back to the first. From Em, A dominant to D, for example. I hope this makes sense.

Well… the theory part is a bit technical, but when we hear your songs they definitely hit the spot! How can you stay so productive?

We get this question all the time, and you know what? We’re free to play whatever we want, and I think that’s the secret. If one morning I wake up and want to make a reggae song, well I make a reggae song. The next day, Guillem comes up with a more crazy folk Irish thing, or Rai adds a bit of jazz. We’re not bound to a specific style, and that gives us a lot of space to make music that we feel close to. Does this make sense?

[Smiles] Good. I don’t know if we can stay this productive forever, but until now this freedom of doing what we love has worked out well. This is something that I can recommend to others, just do what you love, and it will make you happy. Even if you’re not super good at it, but it feels really close to what you stand for… It will work out.

You guys also use a lot of homemade instruments. What’s your favorite one?

Ah yes, the blue bucket, of course! That’s the most present instrument in our videos. During our live shows we even had our stage set up in a way that you are at our terrace 2.0. Of course, the blue bucket was the centerpiece. We use it a lot. To be fair, it sounds great.

Good stuff. Thanks for your time Klaus! We’re really looking forward to your new work.

Thank you. After this I’ll be back in our home studio, so hopefully this fall we’ll have some new songs ready for you.

How are artists coping with the COVID-19 lockdown?
Stay safe and jam along with these awesome hits