The Belgian band STUFF. offers a mix of jazz, beats, and electronics that will increase your heart rate. During Rockit festival we talk to the group about jamming, the jazz scene in Belgium, and their musical guilty pleasures. 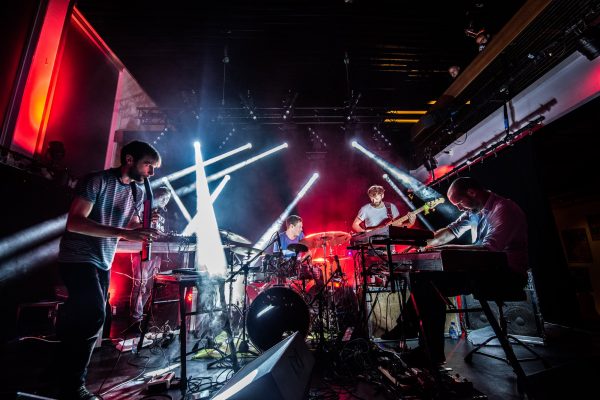 Drummer Lander, saxophonist Andrew, bass player Dries, and turntablist Menno sit quietly in their dressing room. Snacks and drinks are displayed on a long table. With a friendly smile, tour manager Tim gives us a bottle of water. We have so many questions for the boys from Ghent and Antwerp that we start firing them off posthaste.

Hello boys, how are you guys doing?

Lander: “Good, good. We just came from Le Guess Who festival. The day before we played in Manchester and we end our little tour here at ROCKIT.”

Do you have a busy tour schedule?

Dries: “We don’t tour for long periods of time. Now, for example, we have gigs for four days in a row. Then we take a few days rest. It comes in spurts and that’s how we want it. The longest we’ve toured in a row is two weeks.”

You’re from Ghent and Antwerp. Is there a thriving jazz scene in these cities?

Dries: “In Belgium? Yes indeed. So there is a lot going on. A new wave of Belgium jazz is something that has been on the rise in recent years. With STUFF. we are also part of it. A similar group from this movement is Dans Dans. In Ghent there are also a lot of people working on new cool things. 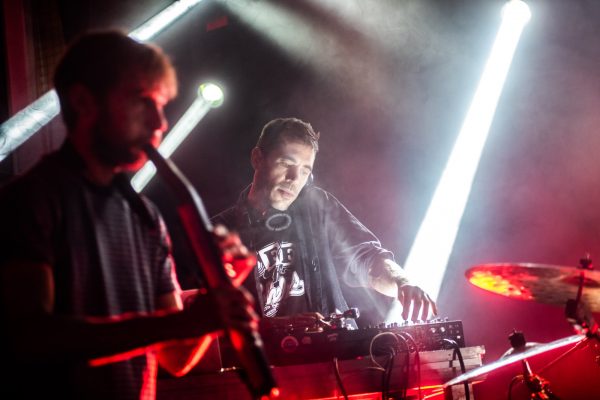 Which one of you contributes the most freaky things in terms of sound?

Really? There is not one person who surpasses the rest?

Dries: “What you say suggests that there is a standard that prescribes whether something is normal or not. I don’t think there is such a thing.”

Andrew: “We focus on group cooperation. When someone does something that is really out there, we call him back, so we preserve the group sound. When it comes to weirdness, we discuss it. Suppose I bring an element of lunacy on the first beat of a track, then Dries is obliged to do that the next beat. That’s the way we handle that.”

Your music consists of a lot of grooves, layers, rhythms that are slowed down and accelerated. It’s almost a kind of trippy jam. Is what you do on stage the same as when you jam or is it just completely rehearsed?

Lander: “That’s right, we jam a lot. But the end product is a fixed composition.”

Dries: “The music is made from a jam, which is reflected in the dynamics of the songs. Once we have found a form in the composition, we pin it. Live there is little or no improvisation.”

Andrew: “Songs often originate in jams, as Dries says. We often record our jams and then edit a piece that fits from one improvisation and add a piece from another jam. When the edit is finished we learn to play it again and record the final version. Some songs often consist of three or more jams.”

Do you have favorite chords you like to fall back on?

Dries: “I think that is very relative. I don’t have any favorites myself.” 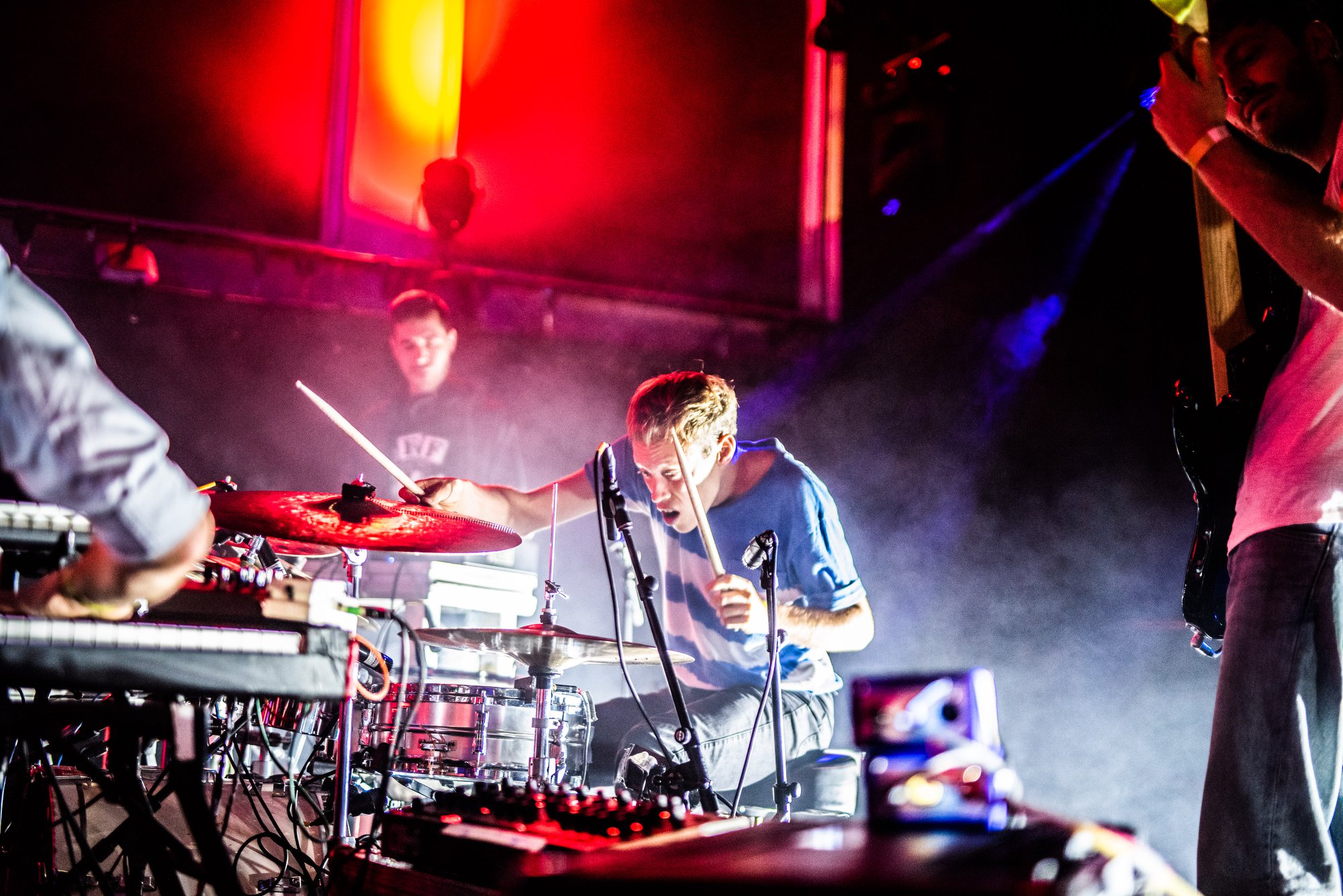 Are you guys involved in other projects besides STUFF.?

Lander: “Yes, we are all independent musicians who come together in STUFF. We also have other projects we are working on. We are all active in different bands, which often also play different genres.

“It’s not like some rock bands that play together from the age of sixteen. We started jamming together in a club in Ghent and that kind of got out of hand. That’s where the roots of STUFF. lie. You can also notice that – even though we are all jazz musicians –  we love different genres. That’s why our music is going in all directions, as you mentioned before.”

Andrew: “We all have a jazz background. Versatility and different collaborations belong much more to that scene. We know each other from that scene and have sometimes done things together with certain people who now play in STUFF. But that’s how it really is since the band was founded.”

If you can give starting musicians one advice, what will it be?

Andrew: “You have to follow your ears. Listen and play lots and lots of music and do what you like. In the end it’s about getting happy with the music you make, because the rest takes so much energy. Imagine recording a record and going on tour, which can be stressful. Then every time you go on stage you have to get satisfaction from what you do. If that is not the case, you will break eventually.”

Lander: “I agree with that. Stay close to yourself. That’s what we do. When we play a composition, but it doesn’t feel right, we look at why it doesn’t. Often times we find out that we have drifted too far from ourselves in a piece. That’s when we stop what we are doing and go back to the drawing board.” 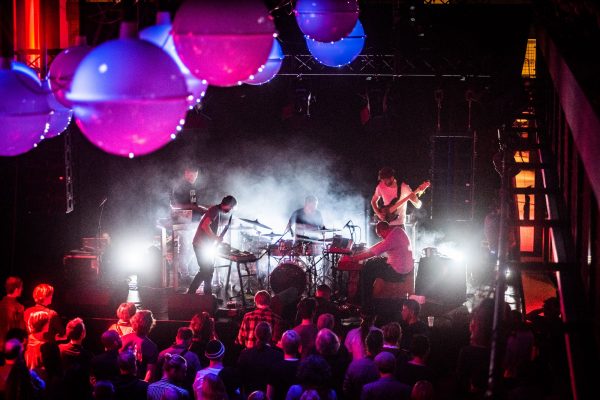 What will the near future look like for STUFF.?

Dries: “We have now reached a point where we have to make new music. Our last album dates from 2016. I don’t say this in a negative way, but we toured so much with this album that it’s time to go back into the studio. We are all looking forward to a period of crafts and creativity.”

Finally, what are the musical guilty pleasures you sing under the shower?

Dries: “Again this suggests that there is a norm, which I don’t believe in. But I do understand what you mean. For me that is Meshuggah.”

Andrew: “George Michael is a favorite of mine.”

Menno: “Whitney Houston, I have a weakness for that.”

Lander: “For me it is Mint Condition. Check out their YouTube clips, then you’ll understand why.”

We most definitely will. Thank you!

Photos by Knelis made at Rockit in De Oosterpoort. Did you miss STUFF. at ROCKIT? No worries, check their tour dates here.

The most played-along songs in Rocktober’s Top 5…
Chordify Relics: 5 of the most ridiculously…