The Chordify x IDK Studio drew a lot of attention at Eurosonic from visitors and passersby alike. Not all live sessions have the same vibes, but you know the crowd’s digging it as soon as they start huddling around the glass case, which is the studio, to start dancing. This is exactly what happened at the Them Dirty Dimes session.

The Dutch formation plays bluegrass that puts a spring in your step. Don’t be fooled by their prewar getup and sound; the astute listener can unveil themes that are much closer to our modern hearts than you might think at first. It’s a great mix of shape and content. After their performance, we talk with Gijs de Groot and the man with the banjo, the brains behind the band, Johan Stolk. 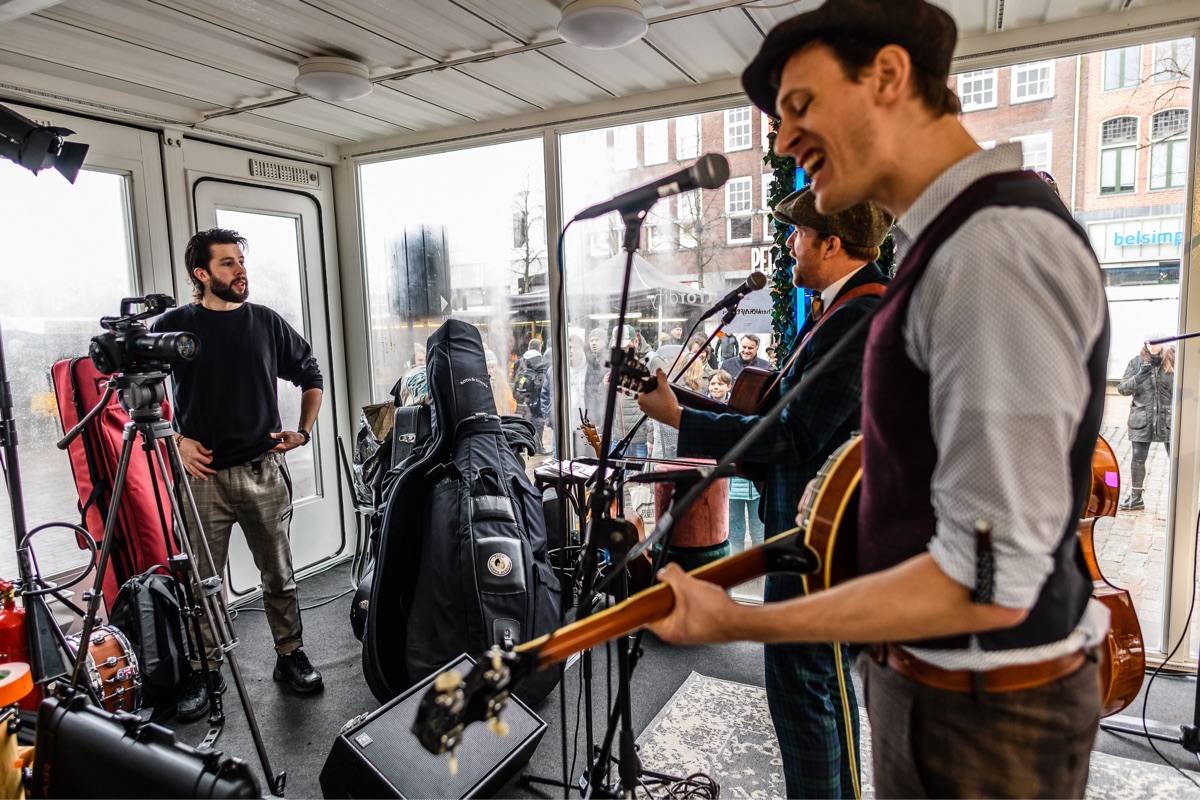 You’ve chosen a special style of music. Can you tell us something about the writing process?

Johan: I write the songs, which means messing around on the guitar until I start hearing vocal lines. The melody is usually the starting point and then I expand it. When I feel it’s finished, I bring it to the rehearsal so the rest of the band can listen. The guys will come up with their parts.

You mess around until you hear a melody?

Johan [laughs]: Yes, that’s right. I’ll hum and mumble while I’m playing until I find a melody that makes me think, I can work with this. As soon I have a hook, I can go on with the verses and choruses. 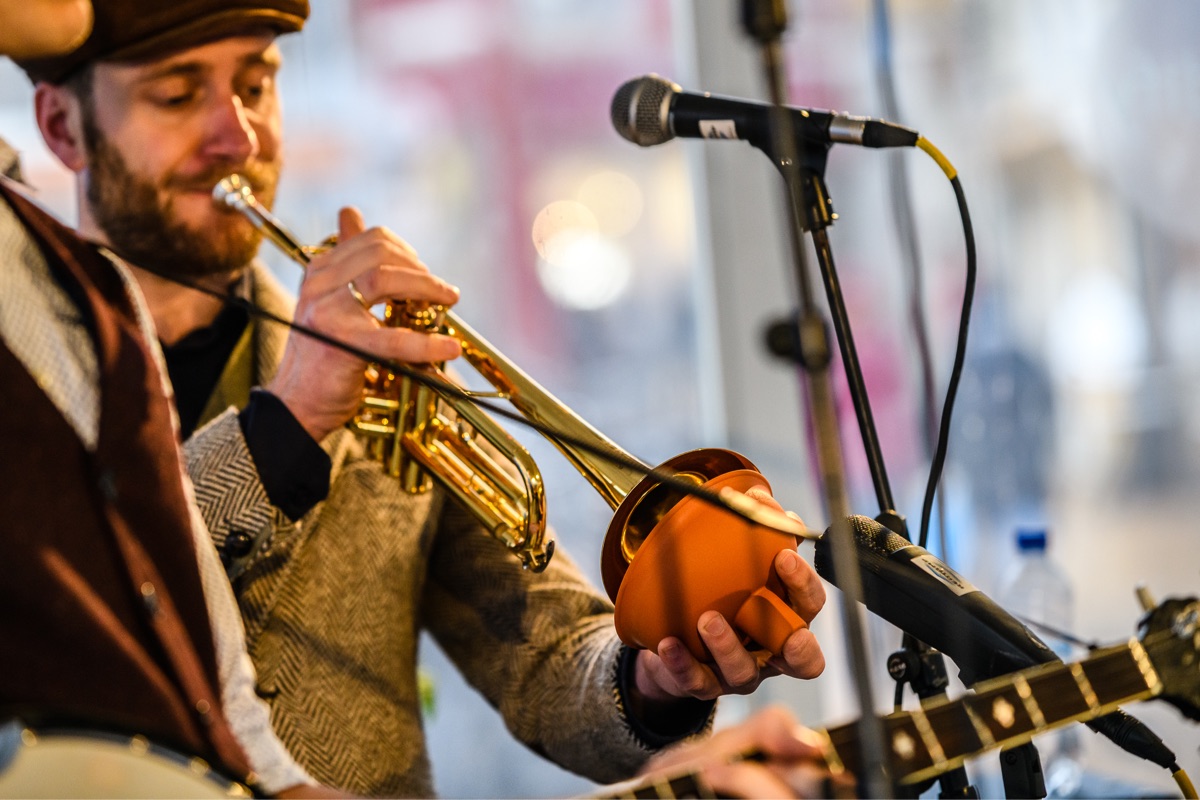 Gijs, when Johan roles into the studio with new stuff. What’s that like from the band’s perspective?

Gijs: Well, it’s a funny thing because you’ll immediately hear whether or not something works. Then I’ll say to Johan: “That’s good, I can work with that.” Lots of times I’ll start singing along instantly, because he writes, but I sing. It’s always an interesting process. We can go toe to toe about the key of a melody.

Sometimes I have a hard time with Johan’s drafts. [laughs] Then I just keep my mouth shut and the song will end up on a pile of unfinished sketches. I think lots of songs have been added to that pile since we started.

How do you handle that Johan?

Johan: Lots of times I’ll realize that something about a song doesn’t feel right, but then we’ll play it anyway. After playing a song a few times everything falls into place … or it doesn’t.

For example, “From Black to Blue,” with that song it took a while before I had everyone convinced. But I was convinced that the song was good from the start, so I had to push it a bit. And then, suddenly, everything fell into place.

How often do you guys rehearse?

Gijs: Johan and I see each other once a week. Rehearsals with the entire band are difficult, but we try to get together once every two weeks.

Johan: The drummer lives in a different town and our bassist is a session musician with lots of projects. So it takes a lot of planning.

What’s the origin story of Them Dirty Dimes?

Gijs: Oh, that’s actually a nice story. Johan and I went to the same elementary school. When we were both in high school we did some stuff music-wise, but we never really stayed in touch. Until a year ago.

I was in a band here that was making music in the same style as Them Dirty Dimes, but that band fell apart. Not long after, Johan asked me whether we could try something together again. So, at one point, we got together at my house and that how it started actually.

Did I hear a Jungle Book tune during soundcheck?

Johan: Yeah, that’s right! “I Want to Be Like You” is our only cover. 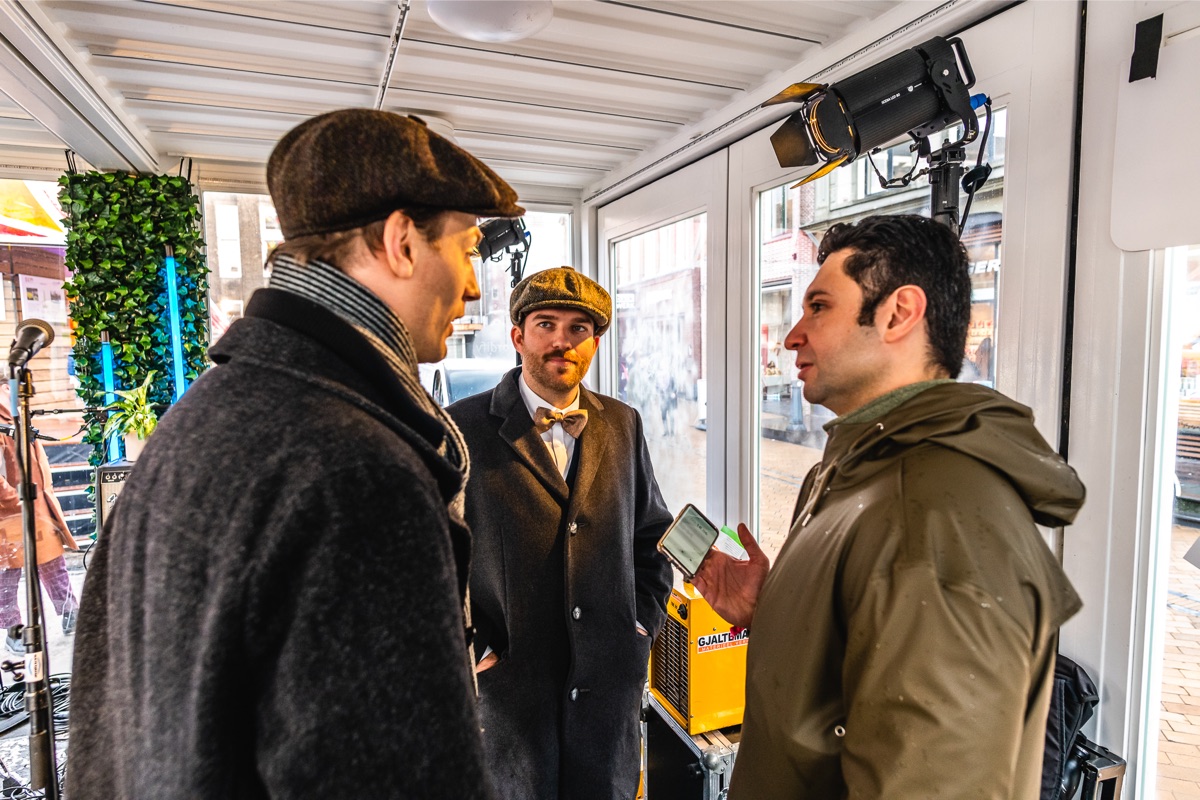 Do you guys have a favorite chord that you like to fall back on when you write songs?

Johan: The good thing about prewar styles is that they used a lot of wacky chords. I personally think gypsy chords are really sweet. Like 6 and 9 chords. Even adding just one of those chords to your composition can imbue it with a whole new dimension. Like a C9, that’s a chord I’m really fond of.

And what about keys?

Gijs: The key of C matches with my vocals. It’s doesn’t take a lot of effort for me to go higher or lower in C.

Johan: It’s less fun for our trumpeter. [both laugh]

Do you guys have tips for beginning musicians?

Gijs: They say that as soon as you figure out barre chords, everything gets easier. And that’s true. So my tip is: don’t avoid barre chords and don’t play around them. Just try it and you’ll see that in time you’ll get the hang of it. But you have to persist.

Johan: Do research on other styles and try them out. I used to play in punk bands, where everything was about power chords. When I discovered jazz chords, a whole world opened up to me. So when you think you’ve seen everything on guitar, try out new genres to get a fresh perspective on your instrument.

Words of wisdom. Thank you, guys!

No problem. Thank you!