What’s lower than a B chord? Bb minor of course. Low, melancholic, and robust – a perfect fit for the drizzly vibes. We’ve selected some colorful tracks that will go well with your autumn leaf collection. Time to adjust your setlist to the darker days. 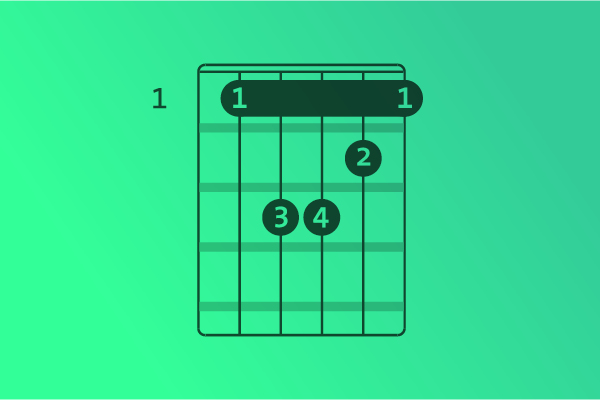 Let’s start with the basics. The Bb minor scale consists of the notes Bb, Cb, Db, Eb, F, Gb, and Ab. We can expect these to pop up in the compositions written in Bb minor key. Go through the chords to loosen your fingers and to get acquainted with their positions on the neck.

“When I’m Gone” by Eminem is a surprise for every jam. It’s a sensitive song about family and being a father. It’s actually a very straightforward hip-hop song, but playing it on guitar or piano will release its poppy core.

The chord progression is suited for both the beginner and the more advanced guitarist, because the most important chords are Gb, Ab, and Bb, with a detour via Fm. Playing tip: tune your instrument to an Eb tuning.

This way you can play the flattened chords (those that are noted with a b) at more familiar positions. So, a Bb is B finger placement, an Ab is an A grip, et cetera.

And now that we’re on the subject of adding surprising tracks to your jam. No one will see “Water Me” by FKA Twigs coming. This alternative pop song is sad and a bit of a challenge.

Pay attention to the count and the rhythm. The chord scheme consists of Gb, Db, Bbm, and Ab, with some detours via Ebm and Bbm7. Playing tip: use the transpose function to lower the chords a semitone, this will make the chord progression look more familiar.

This next song is one for the lovers of minor chords, Billboard charts banger “Boo’d Up” by Ella Mai. This R&B track is a good variation on the songs that came before. It’s still comfortably melancholic, but it has a sparkle of hope.

The chord progression isn’t very difficult. Again, don’t let names like Gbm7 scare you, but just look at the finger placement. You’ll see that it’s only a variation on the Gb where the octave finger is placed a semitone lower.

But, enough sober songs. It’s time for one of the most colorful styles within pop music to take over: Asian Pop. For instance, the opening track of the series “Samurai Champloo” by Shiki No Uta. Do you want to make your nerd friends jealous? Jam along to this track.

The chord scheme mainly consists of three grips: Ebm7, Fm7, and Bbm7. We’ve touched on this before, the m7 chords revolve around the art of omitting. So don’t be scared about the names, but just try it out. The lyrics may take a bit longer to learn. Enjoy and happy jamming!