Eric Clapton, Led Zeppelin, Metallica, Michael Jackson. These are all artists who would have played very different music if it hadn’t been for the blues. You could say that the genes of every pop and rock song stem from the blues. We’ll look at five blues legends to gain a better understanding of this genre. 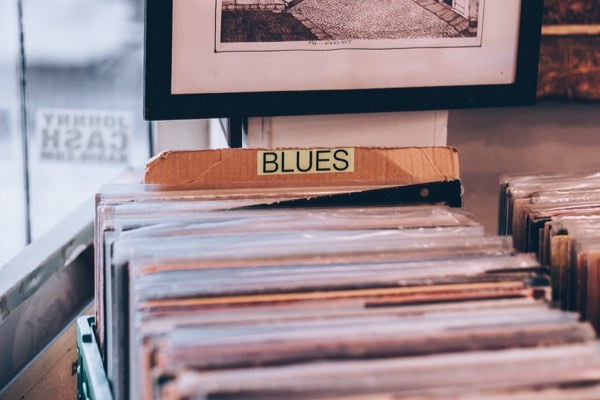 But before we start, it’s time for some background information. You want to know where such an essential genre for the pop industry was born? We’ll zap through the history of the blues in warp speed and then immerse you in some music theory and legendary tracks.

The origins of the blues are sad. The name ‘blues’ has been derived from the expression ‘to feel blue’ (to feel sad). The music style originated in North America during the dark period of slavery between 1860 and 1900, when slaves started singing about their extreme suffering.

They had to do something to make their lives more bearable from time to time, so they sang. But the guards couldn’t know what they were singing about, so they used words that their guards did not know. This way they could call their oppressors names without them realizing it.

The songs from that period are called work songs. The rhythm and tempo are prescribed by the rhythm of the activities of the people during their work on the field. One of the most important characteristics is the call and response style, or dialogue singing, in which one singer asks a question and the other(s) answer(s).

From the 1930s onward, more slaves moved north to the work and the blues got a more urban sound through the use of electrically amplified instruments. Eventually this evolved into rock ‘n’ roll, causing the blues to temporarily disappear from the picture into the underground. However, the genre was revived when white rock musicians like Eric Clapton started playing the blues in the sixties and seventies.

No style can be captured in one simple chord scheme, but the basic principles that are characteristic of the blues can be explained in a chord progression. This may be a bit technical, but don’t worry, you don’t have to understand it to play it.

First, it’s important to know in what key a blues song is played. Suppose a track is set in C. The scale of C is: C, D, E, F, G, A, B, C. If you put this scale in numbers you get I, II, III, IV, V, VI, VII, VIII. So far so good. And now for the technical part. The blues often consists of twelve bars.

The first four bars are I| I| I or IV| I|, the second line of four bars are IV| IV| I| I| and the third four measures are V| IV| I| V|. If you exchange the numbers for the tone they stand for, you can use a variation on it as a chord in a standard blues.

So suppose that you apply this blues scheme to C, then you get the following. The first four bars consist of C| C| C or F| C|. The second row of four bars consists of F| F| C| C| and the last series of G| F| C| G|. Let’s take a look at some blues legends to see this in practice.

When you’re talking about blues legends, you can’t ignore the godfather of blues: Robert Johnson. Known for mixing the classic Delta sound with other styles, and thus paving the way for the artists that came after him. The story goes that one night Johnson went to a crossroads where a large, dark figure was waiting for him at midnight.

The demon took the young musician’s guitar, tuned it and was only willing to give it back in return for Johnson’s soul. Overnight, the guitarist went from moderate to phenomenal, and in his songs he refers to the deal he made with the devil. Johnson died at the age of 27, probably poisoned by the husband of one of his one-night stands. Play along with Robert Jonhson’s “Me and the Devil Blues” – if you dare.

What happens when you’re often found playing at the riverbanks, throwing mud and mucking about in the water? Then you get the nickname Muddy Waters. No joke. Muddy grew up with his grandparents on the Stovall Plantation. There he learns to play the mouth harp. An instrument that provides him with the musical insights that he will later apply to the guitar.

As a young man in Chicago he turns out to be one of the best blues guitarists. Not only his technical skills and embrace of the electric guitar within the blues, but also his overall approach to the genre give Waters the status of a legend. Play along with the arrangement of Bo Diddley’s “Hoochie Coochie Man”: Muddy Waters’ “Mannish Boy.”

One moment you’re earning 35 cents for every 45 kilograms of cotton you pick, the next you’re one of the most famous guitarists of all time and there are blues cafes named after you. But it didn’t come easy, B.B. King had to work hard for this. He also grew up with his grandparents on a cotton plantation. In church, King discovers his love for music.

Inspired by heroes like T-Bone Walker and Django Reinhardt, B.B. King picks up the guitar and teaches himself the blues, which he refines during his time in Memphis, Tennessee. This is where he is given his nickname Blues Boy, or B.B. for short. The greatest success of this legend outside the blues market is an adaptation of Roy Hawkins’ “The Thrill is Gone.” Jam along with “The Thrill is Gone.”

Bessie Smith, also known as the empress of blues, is one of the few female blues legends. Bessie was born in 1894 in Mississippi. At a young age, Smith is taken under the wing by another legendary blues artist Ma Rainey – the first professional blues singer.

Together with Ma Rainey, Bessie develops her talent and is one of the first blues artists to be signed by a big record company, Columbia Records. Her breakthrough comes with a version of Alberta Hunters’ “Downhearted Blues” from 1923. What are you waiting for? Pick up your guitar and jam to Bessie Smith’s “Down Hearted Blues.”

When your mother throws you out of the house at the age of eleven and you have to walk 74 miles to your father after being hit by your uncle, you become familiar with the hard knocks of life. And Howlin’ Wolf knew them like no other. This blues legend is best known for his intense, raw voice and exceptional guitar skills. His sound inspired artists like Tom Waits, Jimmy Page, The Beatles and The Rolling Stones.

Record labels discover him when he starts his own radio show, and they compete with each other to sign him. Eventually, Howlin’ Wolf moves to Chicago where he puts blues on the map together with Muddy Waters and others. With his impressive appearance he soon got the nickname Three Hundred Pounds of Heavenly Joy.

His 1971 album “London Sessions” is still the best-selling blues album ever. Try playing this song at the campfire next time. Learn the chord progression of “Killing Floor” by Howlin’ Wolf here. It’s not that difficult. Happy jamming!