Every so often you hear a song, look it up on Chordify, and discover that while the chords are correct there’s something in the overall sound that just isn’t the same as the original. Why is that? In fact, it could be anything: from the instruments used to the way it is produced. But occasionally, it’s just your guitar’s tuning. That’s why we’re looking at the DADGAD tuning today.

Guitarists like to play around with different ways of tuning their guitar. In part one of this series we delved into the drop D tuning, which is achieved by tuning down your sixth string – the lower E string. In this blog, we’ll turn it up a notch and look at how you can tune your whole guitar in service of the D, which is what happens in the DADGAD tuning.

The name DADGAD stems from the tones of the open strings in this tuning. The lower E string (sixth string) becomes a D, the A string (fifth string) stays the same, the D string (fourth string) also stays the same, as does the G string (third string).

From here on come the major adjustments. The second and first string in the DADGAD tuning are tuned down a whole tone. So, we lower the B string (second string) into an A and the high E (first string) becomes a D; which makes sense because the lower E is also lowered to a D. 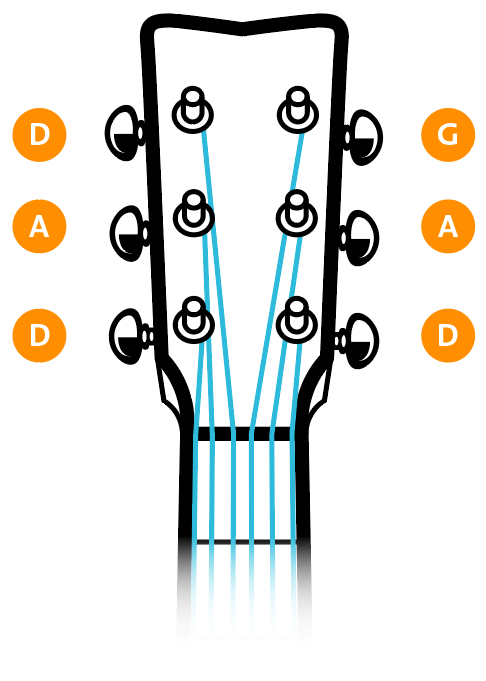 And now, what happens when we hit all strings? Try it out. Sounds good right? It sure does. This is because the intervals between all tones in this tuning are from the D scale.

What happens when you tune your guitar in DADGAD?

So, what happened to your guitar by tuning it in DADGAD? Well, if we start counting we see the following: there are three instances of the root D now, the fifth (A) has two instances and then there’s the G, the fourth note from the D scale.

In a previous blog about the D chord, we saw that a chord consists of a root, third, and fifth. The DADGAD tuning, played open, has a third instead of a fourth. In music theory, we call that combination a sus4 chord.

The third decides whether a chord is major or minor. Leaving it out creates a harmony where the root is strengthened by a fifth and colored by a fourth but isn’t explicitly major or minor. This reminds us of an often-used harmony in metal and rock: the power chord.

A power chord is a stripped-down version of a chord, reduced to the harmony between the root and the fifth. In general, it sounds harder, heavier, and dirtier. If you place your finger flat across the neck of your guitar on the second fret and hit the first three strings, what do you hear? Does that sound familiar? Yes, that’s an E power chord. Just like drop D, pressing down the first three strings suffices if you want to play a power chord. Convenient, right?

Based on illustration of Sergey_Kandakov / Freepik. Click picture to enlarge.

An advantage of this open tuning is that you can now play along with harmonies originating from instruments like bagpipes and harps. Yes, and where do we hear instrument like that? Indeed, Celtic music. It’s an often-used tuning in Irish folk music, but that’s not the only place we encounter it.

The harmonies that are easily created with a flat finger in the DADGAD tuning make it easy to play country-style side guitar as well. Moreover, we find it in Moroccan music and Indian genres as well. So, in general, you’ll find this tuning in country, Middle Eastern and Asian music.

All good and well, but maybe a tad obscure. “Are there any bands that we know, that make use of a DADGAD tuning?” Again, good question. You’re quite alert today. In the mainstream, it is still a somewhat experimental tuning. Still, there are some guitarists who’ve written classic pop songs using DADGAD.

Just take a look at the chords from Neil Young’s “Cinnamon Girl” and his song “Cortez the Killer.” Try playing these songs with your guitar tuned in DADGAD. That sounds more like it. And it’s easier to play.

The chords scheme of Led Zeppelin’s “Kashmir” is also written in this tuning. And what about Jimmy Page’s use of the DADGAD tuning in “Black Mountain Side” on the debut record Led Zeppelin. The DADGAD tuning is nice for songs in D. Chords that go well with that are the Am chord, the C chord, the G chord, and the Bm chord. Those are prevalent in the above-mentioned songs.

Someone that uses this tuning a lot is the Irish singer-songwriter Luka Bloom. In an interview, he told us that it strengthens his voice and the overall vibe that he’s aiming for. Try playing along with the chords of Luka Blooms “Peace on Earth.” Enjoy and happy jamming.