So you want to learn a new instrument. You’ve been locking yourself in your room for hours on end, practising the same chord or the same song over and over again, but the results are still quite disheartening? Well, maybe it’s time to join a band. Yes, you read that right. Stay with us for a second, and we’ll give you a few reasons why you too should be joining a band. 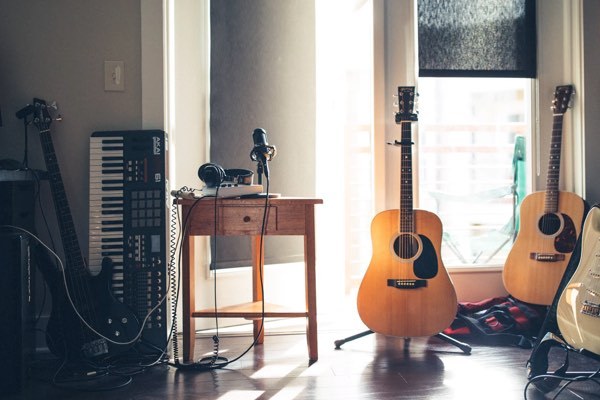 If you have ever wanted to learn a new language, chances are someone has given you the advice that the best way to go about it is to visit a country where that language is spoken. Some will take it even further by choosing a destination where falling back to English is not really an option, meaning you HAVE to talk to people in their language, even if it makes you feel somewhat incompetent at times.

It’s all about the culture

Here’s the thing: What makes learning a language in a country where it’s spoken so effective is that you’re completely immersed in the culture surrounding the language. It’s hard to avoid speaking the local tongue if all tv shows, movies, books, restaurant menus and road signs call for it. Not to mention all the people who will definitely appreciate your linguistic efforts, no matter how clumsy you think they are.

The same is true if you replace language and country with instrument and band. You will get better at it, simply because you have to and because you’re constantly surrounded by a musical environment. You can’t just skip a chord that’s a little more on the difficult side and come back to it later when you feel like it. You’re part of a group after all, so you gotta jump on the bandwagon—pun intended—and do what you can to keep up. It might be a bumpy ride, but you shouldn’t be scared of messing up.

When you join a band, you might feel inferior to your more-experienced group members. You really just want to get on their level but don’t know how to get there. As a German who moved to The Netherlands, I can relate to that. After two years of living here, my Dutch skills were still abysmal, even though I had been taking classes. What eventually solved my problem was good old group pressure. I told my Dutch friends to stop switching to English when I was around, meaning that if I still wanted to be an active member of our friends group, I had to familiarise myself with the Dutch language.

It sure is nice to be mindful of other people’s weaknesses and make everyone feel included. But then again, how will you ever rise to someone else’s level if they keep descending to yours?

It’s okay to ask for help

In fact, messing up what is supposed to be a sick guitar riff can be a blessing in disguise when you’re playing in a band. Think about it: If you mess up by yourself with no one to point it out to you and show you how it’s done, chances are it’ll take you much longer to get to where you want to be.

A fear of making mistakes shouldn’t hold you back, whether it’s an instrument or a language that you’re trying to learn. And if you happen to be surrounded by some like-minded people, you should seize that opportunity and learn with and from them.

At the end of the day—although it can be scary at first—stepping outside of your comfort zone almost always brings huge rewards with it. And I know that joining a band is definitely outside of the comfort zone for many musicians who just started out. But it also gives you an incredible advantage, because you can surround yourself with like-minded people, you can motivate yourself with an upcoming gig, and you can speed up the process of learning the instrument because any good band will have a regular practising schedule. This is next-level Learning By Doing, but it sure pays off in the end.

The truth is, not all bands are keen on welcoming less experienced players, understandably so. That shouldn’t hold you back, however. I’m sure you already know some musicians or other people who are just starting out. Who says you can’t assemble your own team of aspiring rockstars? Now that you know that joining a band is beneficial for everyone involved, it’s time to share that knowledge with others and get them excited to join you in your adventures.

Lilly Hiatt: 'Everyone has their own learning style,…
Four ways to give your instrument some sweet lovin'